How Wonder Woman Should Have Been Rebooted


Next week, on the 21st of September Wonder Woman #1 will be released.  Brian Azzarello will become the latest in a long line of talented writers to attempt to reinvent Wonder Woman and make her accessible to a wider audience.  Over the years many gifted writers, including Robert Kanigher, Denny O' Neil, George Perez, Len Wein, William Messner-Loebs, Greg Rucka, Allan Heinberg and Gail Simone have all presented us with their vision of Wonder Woman, and each writer has had their own unique take on her.  Azzarello apparently intends the book to be a horror thriller!  Sadly these many different interpretations often seem less a result of the versatility of the character and more due to the difficulty writers seem to have in pinning down the true core of Wonder Woman. She's simultaneously a feminist icon and fetishistic fantasy, a fierce warrior and an ambassador for peace, a noble and serious figure who fights giant eggs with invisible jets, a global hero dressed in the Stars and Stripes.  She's a walking bundle of contradictions and this makes her both fascinating and alienating to the average reader.  No doubt about it, she's a bloody difficult character.

With an arrogance that can only be displayed by comic fans, fellow blogger and best pal Gareth Madeley and I have decided that we know better than seventy years worth of DC Comics writers!  We have decided we can fix Wonder Woman once and for all.  We now present to you our take on the character, the definitive take on the Amazing Amazon!

BEHOLD THE TIMELINE OF THE NEW WONDER WOMAN.....

The Past - Hippolyta, Queen of the Amazons, prays to the Greek gods for a daughter.  She creates a baby out of clay and the child is granted life by the gods!  Princess Diana grows to womanhood on Paradise Island.  She has been granted amazing powers by the gods however these powers have yet to develop. These magical gifts must be earned!

1941 - Steve Trevor crash lands his plane on Paradise Island. He tells the Amazons that he is a pilot in the U.S Airforce and explains that his country is currently battling the Axis threat .  The Amazons recognise the potential threat and great evil of Hitler and agree to send an Amazon to man's world with Trevor to aid the Allies in their War.  A contest is held to determine who will accompany Trevor. Diana is forbidden by her mother to take part but she dons a mask and does so anyway.  Of course, she wins.  It is important to remember that at this point Diana has no special powers and therefore has no particular advantage over her fellow Amazons.  She wins by skill, courage and determination.  Hippolyta is angry and rashly tells Diana that she may accompany Trevor, but is banished from the Island for all time.  Hippolyta swiftly regrets her hasty words but the damage is done and Diana is gone. 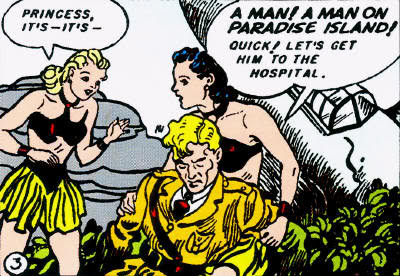 World War Two - Diana is taken to the U.S. Government by Trevor.  She is given a costume with the colours of the flag to better serve as a propaganda tool.  The government agents who design Diana's classic bathing suit uniform are leering perverts who intend to make her a figure of titillation, but Diana wears the costume anyway and on her it becomes a symbol of empowerment and nobility.  While her existence is never officially acknowledged by the U.S, Diana becomes a legend of the War. To the people of the Allied countries she is a character from propaganda posters, comic books and movie serials.  To the enemy soldiers she becomes a myth of the battlefield.  Wounded, rambling, shell shocked Nazis describe a fearsome female warrior racing towards them on horseback, leading American soldiers up the beach, deflecting machine gun bullets with her bracelets and cutting down their fellow soldiers with her sword.  Diana is particularly active in the Mediterranean theatre of War, that is after all her part of the world. 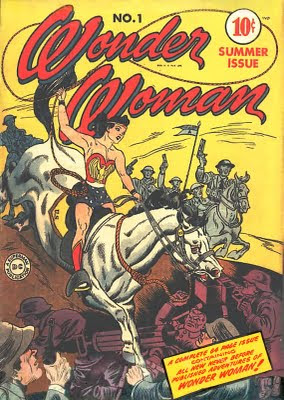 The End of The War - Throughout the War, Trevor is by Diana's side. This version of Steve Trevor is a much more thoughtful, intelligent and serious man than we've seen in the past. Diana and Steve fall in love and begin to make plans for after the War. Then, tragedy strikes! Trevor is killed in one of the final battles of the War.  Shortly afterwards the bomb is dropped on Hiroshima.  Diana sees the death and suffering of the innocent women and children of Hiroshima and the War ceases to be black and white for her. Shades of grey enter her view of man's world for the first time and she is disillusioned.  She leaves the United States. Her costume, invisible jet, magic lasso, purple ray gun and various weapons and gadgets are consigned to Area 51.  Diana does not know that Hippolyta regrets her decision and so she proceeds to roam the Earth. 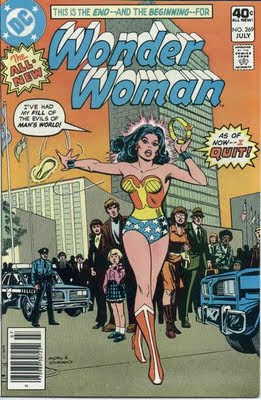 1950s-1960s (The Lost Years) -  Diana cuts through the 20th Century like a hot knife through butter, leaving her mark everywhere.  Along the way she finds friends, enemies and lovers, many of whom will later come back into her life at inopportune times.  She steers clear of the United States but keeps meeting and getting involved with various family members and descendants of Steve Trevor, almost as if her fate and the fate of Trevor's lineage had been linked by the gods!  As the years pass Diana notices she is becoming stronger, faster and more resistant to injury.  She does not age.

Late 1960s-1970s - Diana returns to the States with her new-found companion and mentor, I Ching.  She opens a fashion boutique and has many groovy, Kung-Fu based adventures.  Eventually I Ching dies of old age and Diana is once again alone. 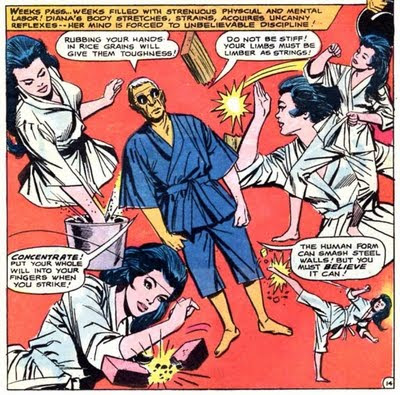 1980s-1990s - Diana's fashion boutique has grown into a vast business empire.  Diana is still combating evil, but this time as a corporate raider, taking over and gutting corrupt businesses and using their resources for good.  She opens a string of women's shelters.  During the '90s she feels her latest role as business leader has left her out of touch with the rest of the world and she feels more alone than she ever has before.  She leaves her company in what she believes are safe hands and resumes her wandering.  Years later she will find that her company has fallen into the hands of the ruthless and evil Veronica Cale!  Diana's long life leaves a lot of room for villains to be faces from her past seeking vengeance.  It also leaves room for Donna Troy.  Is Donna a young girl that Diana rescued and adopted during the nineties? Is she a girl created by Hippolyta to replace Diana?  Either way, there's plenty of room for her to be slotted easily into continuity.

NOW! - By the time we reach the modern day Diana has gradually become so powerful that she is now invulnerable, she can fly and she has super speed and strength.  Diana meets the latest of Steve Trevor's descendants (Steve Howard perhaps?).  Howard and his female friend (Etta Candy? Cassie Sandsmark? Vanessa Kapatelis?) become Diana's firm friends.  They are like Xander and Willow to her Buffy.  There might even be a potential for some sort of Buffy-esque love triangle here. Her new friends help her to set up a new secret identity as Diana Prince.  Although this is a name she has used occasionally throughout her life (particularly during her boutique/business days) this is the first time the name has been anything more than something to sign on documents.  Diana is now trying to discover who is Diana Prince?  Through her new friends Diana rediscovers her humanity and with their help and encouragement she finds a new role for herself in the modern world.  A SUPER-HERO!  Before she can do this of course Diana and her friends must break into Area 51 to get her stuff!  She makes a new costume (the silver lined reboot costume), and eventually joins the Justice League as WONDER WOMAN! 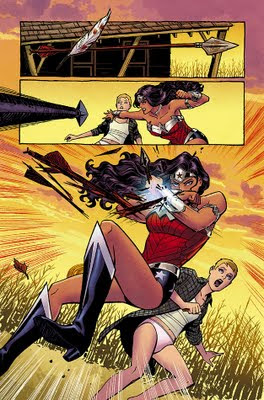 So there we have it.  Our take on Wonder Woman.  What do you think?  A work of genius that DC Comics simply must make happen or the usual wrong-headed ravings of deluded fanboys?  Drop us a comment and let us know!
6 comments: