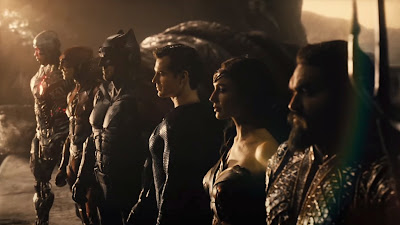 Yesterday I had the immense pleasure of watching the long awaited Zack Snyder cut of Justice League. I wanted to collect some of my initial thoughts about the film somewhere other than Twitter. Needless to say there are potential spoilers ahead, but I'll try to keep them to a minimum.

Justice League is like nothing else that exists. This film is four hours of characters and events that have been permanently turned up to 11. Your mileage may understandably vary on whether that's good or bad - I think it's very, very, good.
Snyder has thrown everything at the wall and frankly it's bonkers, but there's still a coherent story there that's told with heart. It may be heart that's filmed in slow motion with CGI butterflies landing on it, but it's still heart.
It's gigantic, mythological nonsense played absolutely straight and it ends up coming across like a 12 year old superhero fan's brain plugged into a Hollywood budget. It's flawed but magnificent and I loved it.

This film would look fantastic on the big screen, but to be honest streaming on TV is the perfect medium for it. Snyder has obviously been working on the assumption that this is his last chance to play with these characters. Ideas that seem as if they were intended for sequels that will now never happen get plenty of screen time (especially in the epilogue). These scenes have little to do with the main plot - but they work! Watching this film on your couch with the ability to take comfort breaks whenever you want turns what might seem like unnecessary flab in the cinema into entertaining diversions from the main plot.
It was the same with Batman v Superman. Watching the extended cut on Blu Ray was a far superior - and more coherent - experience to the theatrical cut. This doesn't actually speak well for Snyder as a film maker considering his entire job is to create cinematic experiences. But whether you take it as a positive or a negative, streaming on TV is his ideal medium - everything he wants to pack in to the film has room to breathe.
I understand that the film is conveyed in a screen ratio designed for IMAX but I have to be honest, I never notice stuff like that.
3. The Flash
Ezra Miller's performance as the Flash knocked my socks off. They're a very funny and charismatic actor, but they can also bring the emotion when they want to.
During the final battle the Flash performs a super-feat and it works brilliantly, partly because the CGI is so beautiful, but mainly because of Miller. In the part of the film leading up to the feat Miller conveys the stakes beautifully by expressing fear, desperation, and frustration so effectively.
4. Cyborg
Ray Fisher's Cyborg is the spine of the film - at times he's carrying the entire story. Thanks to his acting and presence you're with him every step of the way, which is no mean feat considering he's the cast member who appears to be draped in the most CGI.
It's a shame that Fisher seems to have been treated so poorly by the studio, as he deserves to have his own Cyborg spin-off franchise.
5. Inevitable comparisons with the Joss Whedon version
Pretty much everything I loved about the Whedon version of this film was filmed by Snyder - most notably the bit where Superman turns to look at Flash during the fight at the monument, and the iconic Superman shirt rip scene.
The startling difference in quality between the Snyder cut and the Whedon version highlights how, in the past when I've said that certain films have "too much CGI", what I really meant was "the CGI is really bad in this film and it took me out of the experience". Heavily CGI'd scenes that look empty and unfinished in the Whedon version look absolutely beautiful in the Snyder cut - like painted comic book scenes that have come to life.
I get the impression that Whedon may have been trying to ground his version somewhat by turning the interactions of the characters into something he felt the audience might identify with. But all he's done is taken material that was specifically designed to be larger than life and made it seem mundane. What Whedon produced is so robbed of the spirit in which the film was clearly intended you have to wonder how committed Whedon truly was to the project.
6. The Knightmare (mild spoilers)
Throughout the film, but particularly in the epilogue, we get glimpses of a nightmare future that may come to pass, where Superman is a killer working for Darkseid. The motivation for this change of character appears to be the death of Lois Lane.
If there's one aspect of Snyder's vision of the DC Universe that I dislike it's the idea that Superman will become a villain if Lois dies. Superman is sometimes depicted as being aloof, or lonely, but he is not a character with a tenuous grasp on his humanity. He's not Marvel's Reed Richards! I just don't believe that a tragedy, however devastating it might be, would be enough to turn him into a monster.
There's a hint within the film that the tragedy causes such a dramatic change in Superman because he's been infected with "anti-life". If this is the case it's conveyed far too subtly for my liking, which is strange because virtually nothing else in the film is conveyed subtly at all.
The Injustice games, in which Superman is also turned evil by the death of Lois, are such a big factor in how the public at large see Superman that I'd hate for this to be a trope that is forever linked with the character.
Besides, killing women to motivate men is cliched and frankly, gross.
7. Let's call it a day
Zack Snyder has indicated that he is unlikely to make any more Justice League films and despite my love for this film I think that's probably for the best.
I am so very glad that this film exists, but superheroes belong to everyone.
As awesome, and unique, and apparently well received as the Snyder Cut may be, DC superhero films shouldn't always be strange, wonderful, flawed masterpieces that are best enjoyed at home by people with four hours to spare. They need, and deserve to be films that practically anyone can enjoy.
Marvel built up to their huge, super-long, multi-character epics and idiosyncratic TV series' with 20 or so well made and accessible crowd pleasers. I'm not saying DC films should duplicate Marvel's tone, or even their methods, but they should strive to emulate Marvel's success.

Having said that I wouldn't trade Zack Snyder's Justice League for anything. There may never be another film like it, but it's so spectacularly huge in every way that there really doesn't need to be!
No comments: