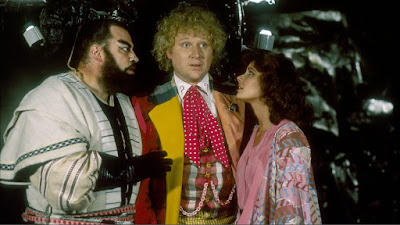 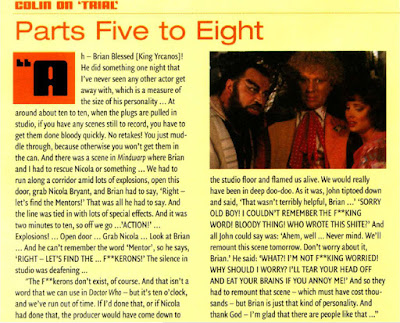 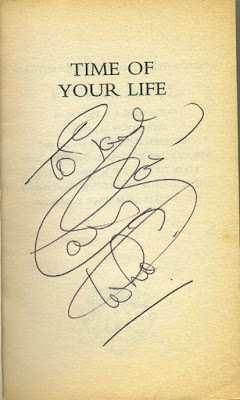 Since the New 52 is officially over today here's a list of my favourite titles released under that banner. You should definitely read them all!

Just imagine Grant Morrison's mind-bending cosmic concepts done in the style of Jerry Siegel and Joe Shuster's fast paced, kinda rushed, two-fisted, angry, joyful, passionate, early Superman strips. Well you don't have to imagine it 'cos it's all in the first 19 issues of the New 52 Action Comics!

Highlight:
The first 8 issues, Superman & the Men of Steel. Superman laughs at danger, dangles corruption of a roof and then takes a running jump into space to punch evil in the face. 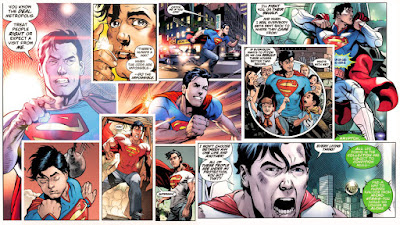 Simply phenomenal comics. Snyder and Capullo find brand new things to say about a 75+ year old icon, and brand new ways of saying it too. Up there with Miller, O'Neil & Adams, Grant & Breyfogle, Englehart & Rogers, and all the legends of Bat-history.

Highlight:
Zero Year. Writing a new origin for the character was a brave move considering how beloved Frank Miller's Year One is, but Snyder and Capullo gave us an epic tale chock full of imagery that's destined to become just as iconic and revered as Miller's work. 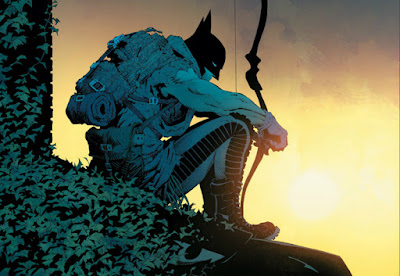 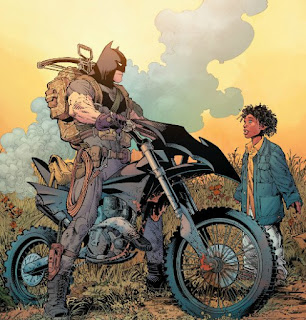 I can understand why the first year of this book wasn't everyone's cup of tea, even though I loved it. The first story arc, Origin,  is a big dumb punch-up, while the second arc, The Villain's Journey is quite dark. But in the second year artist Ivan Reis came on board, the Throne of Atlantis crossover began and Justice League became more of a place for the punch-the-air superheroics that made Geoff Johns famous. This book has made a Cyborg fan out of me and issues 28 & 29 will make the Metal Men your new favourite characters.

Highlight:
When a superhero comic crosses over with another title the results can often be messy and inconsistent. But Throne of Atlantis, a crossover with Aquaman, is exciting, consistent and coherent, and thanks to Ivan Reis and Paul Pelletier, it looks amazing. Trinity War, a crossover with Justice League Dark and Justice League of America isn't quite as successful, but it contains one of the greatest reveals of a spy in the heroes midst in the history of comics. The subsequent event that spun out of the events of Trinity War, Forever Evil, is one of the greatest Lex Luthor stories ever told. 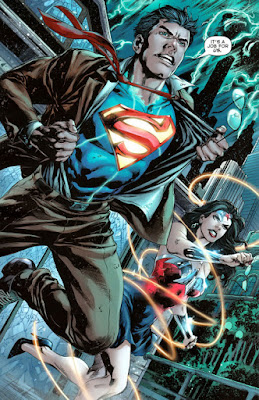 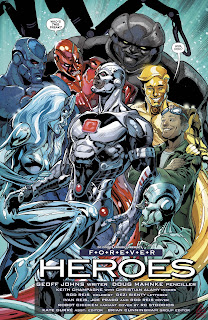 Whenever people have bemoaned the darkness and lack of traditional superheroics in the New 52 my reaction has always been to tear my hair out and scream "BUT WHAT ABOUT FLASH!!?? READ FLASH FOR THE LOVE OF GOD!!!" There's not a speck of grim or grit on Barry Allen, he's still a straight up, decent, honourable, super-goddamn-hero getting up to traditional super-heroics. If he's not vibrating a crashing plane safely through a bridge he's posing for photos for a grateful public. This book was also one of the most beautiful looking comics on the stands. Manapul was always finding inventive ways of showing Barry's powers that always enhanced the story and were never distracting or clever-for-the-sake-of-clever. Buccellato and Manapul's Flash was just pure fun.

Highlight:
The first arc, Move Forward, introduced Mob Rule, a new character with a really original power that made him a perfect Flash baddie. Later there came the Reverse arc which introduced a brand new Reverse Flash with a compelling new origin that tied him to Barry's sometimes love interest, Iris West. 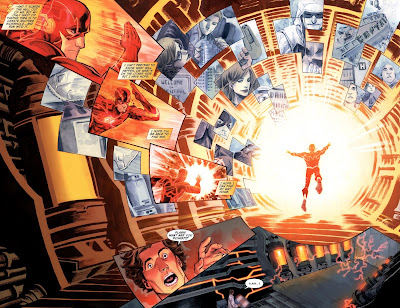 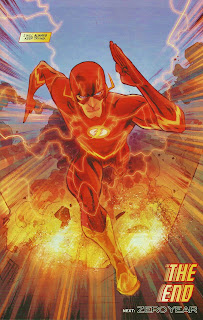 Azzarello made great use of Wonder Woman's ties to Greek Mythology during his run. But rather than trot out the old beardy-men-on-clouds cliches, he and artist Cliff Chiang gave us inventive, modern twists on the Greek Pantheon, while at the same time really playing up the dysfunctional family aspect of the mythology. They also played up Wonder Woman's warrior side, while simultaneously keeping her compassion and capacity for love front and centre. Add to this some gorgeous art, a shocking new origin, and the most fun version of Orion of the New Gods ever, and you've got one great comic.

Highlight:
During the second arc, Guts,  Wonder Woman is shot with Eros' pistols and betrothed to Hades, god of the Underworld. The reason for her subsequent escape is one the greatest WW character moments ever.
"I love everyone." 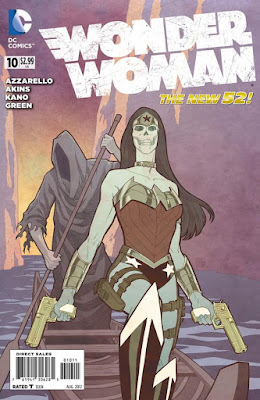 This title had a ton of mind-bending concepts and crazy, imaginative superhero parodies, but it was all grounded by two relatable and thoroughly likeable lead characters. The unlikely relationship between Nelson Jent and Roxie Hodder is as much fun to read about as the weird identities they dial up.

Highlight:
Cock-a-Hoop! Definitely Cock-a-Hoop! With the fate of the world at stake, Nelson Jent battles a gigantic, man shaped, sentient void, armed only with the powers of a hula-hoop with a rooster head. 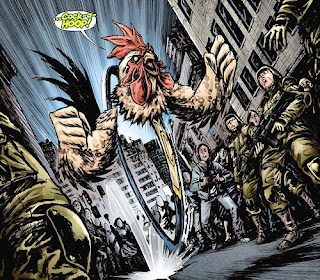 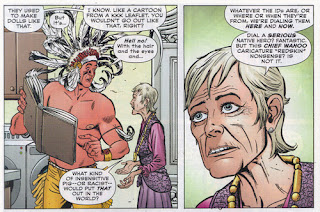 Oliver Queen is a character who has been portrayed at various times as a Batman rip-off, an angry hippie, and a middle aged activist. Perhaps as a result of the power and resonance of these versions of the character the title initially floundered a bit as writers struggled to find an appropriate voice for a youthful, New 52-ified Green Arrow. But then, starting with issue 17, Jeff Lemire began to establish a distinctive new status quo for the character as he introduced the mysterious Outsiders; several clans of warriors, each masters of a different weapon. He also began to explore Ollie's reasons for being on the island where he mastered the bow and arrow. There are undoubtedly nods to Mike Grell's famous Green Arrow run from the '80s, and the recent Arrow TV series, but Lemire has built a brand new mythology that fits the character like a glove. Andrea Sorrentino added to the distinctiveness by giving us some artwork that looked like no other superhero book on the shelves. Hopefully their work should serve as inspiration for subsequent writers for a long time to come.

Highlight:
Lemire's first arc is one of the most powerful opening storylines of any run. The status quo established in the previous 16 issues is torn apart piece by piece as Ollie is stripped of his money and gadgets and left with only his wits and a handful of arrows. 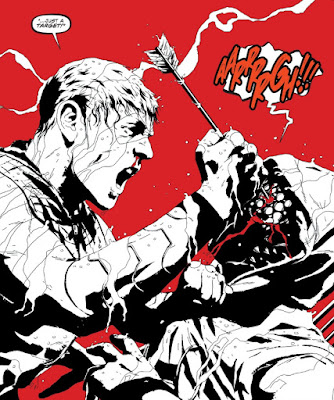 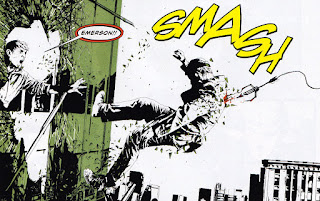 The New 52 offered a lot more great comics, including:

The New 52 also had a lot of major flaws (see here). But Morrison's Action Comics, Snyder & Capullo's Batman, Johns' Justice League, Buccellato and Manapul's The Flash, Azzarello and Chiang's Wonder Woman,  Miéville's Dial H, and Lemire and Sorrentino's Green Arrow are some of my favourite comics ever, so I'll always be grateful to the New 52 for them.

What were your favourite New 52 comics?
6 comments: