Comics Should Be Good! have recently run a poll to find the Top 100 Marvel & DC Characters. Of course I voted. Like all superhero comic fans I'm insufferably arrogant and believe that I know better than every other fan, so I thought I'd present my own personal list.

Who was #10 in CSBG's list? Green Arrow (Oliver Queen)


James Robinson's Starman is a masterpiece that creates a world of nostalgia, horror and wonder, filled with characters that are simultaneously both believable and fantastic. The series is seeped in DC Comics nostalgia yet also manages to feel fresh and relevant. And yet this amazing world just wouldn't have worked if it didn't have Jack Knight at it's centre. Jack is an avid collector of 20th Century antiques and kitsch, something it's hard not to identify with as a comics fan. He also has a difficult relationship with his father Ted, the original Starman. This relationship is the heart of the series and it sucks you in so much that by the end Jack feels like your best friend and Ted feels like your own dad.

A fan who wished to experience the DC Universe for the first time could do a lot worse than immerse themselves in the world of Starman. It's a story of superheroes, horror, sci-fi, romance, wonder, nostalgia, and family.These things pretty much sum up what DC Comics is all about.

Before the late '80s Wesley Dodds was a Golden Age superhero best remembered for accidentally turning his sidekick into a sand-monster and then keeping him locked in a giant bell-jar for decades. When Neil Gaiman created his version of Sandman he threw in a one panel reference to Wes as a tip of the hat. Matt Wagner, Steven T. Seagle and artist Guy Davis ran with this reference and created Sandman Mystery Theatre. The series is set in New York in the 1930s. It's a crime thriller, and the tone is noir-ish and ugly. The crimes are brutal, the criminals are grotesque, the cops are racist, everything seems covered in a layer of grime and cigarette smoke, and WWII is an ever looming threat. Even Wesley himself is depicted as short, podgy, and owlish.

Among the ugliness however is the relationship between Wes and his partner and lover, Dian Belmont. Wes and Dian together are quite simply beautiful. Their relationship is one of the most realistically depicted romantic relationships in comics. It has ups-and-downs, and doubts, and fears, and break-ups and make-ups, and that makes it all the more beautiful.  It's a true partnership and it's beauty contrasts with the world around it, and makes you want to stay in that ugly world with Wes and Dian a bit longer.

Who was #8 in CSBG's list? Green Lantern (Hal Jordan)

Oliver Queen has often been referred to by fans as the "socialist" super-hero but his self reliant, libertarian views have always struck me as more right wing than left, albeit in a vague way. Ollie has typically clashed with characters who represent "the state", like Hawkman, the alien space-cop, and also the Guardians of the Universe, who have taken it upon themselves to police all of creation with their Green Lantern Corps. He always seems more concerned with what the individual can do to help the world, rather than what the government, or even his fellow Justice Leaguers, can do. While Ollie has modeled himself after Robin Hood, who stole from the rich and gave to the poor, it's worth remembering that Robin is often depicted in popular culture opposing excessive taxation.

That said, I'm sure it's possible to argue that Ollie's anti-authoritarian leanings have more in common with the left if you were so inclined. I think the reason Ollie's politics are difficult to pin down are part of his appeal - he's a thoroughly complex, almost contradictory character. Despite this, his defining characteristics remain a social conscience, a fierce sense of justice, and of course an unparalleled skill with a bow and arrow.

Who was #7 in CSBG's list? The Flash (Barry Allen)

James Robinson described Jay Garrick as "the everyman character that we all like, that we all want to be, want to hang out with. He's the likable guy, the one you care about." That sums up Jay, he's just a really nice bloke. He's warm, comforting, and reassuring, like if your favourite cardigan became a superhero. But that's not to say he's bland. After all, he's traditionally depicted as being active in WWII and he embodies the greatest generation more than any other super-hero, apart from Captain America. So, he's more like if your favourite cardigan became a superhero, liberated Europe, and then punched Hitler in the face at super speed.

Lois Lane is a human being in a Universe of super-gods.  She's ambitious, competitive, bloody minded, and a lousy speller. She's a gifted investigative journalist with a passion for justice, who hates bullies. She only ever writes the truth and will risk her life to get to it. She's worked twice as hard as her co-workers to get where she is. She's had military training from a father who wanted a son. Her cat is named Elroy.

It's only right that the most human character in the DC Universe should be the one, true love of a god-like alien who's so in love with the human race that he's dedicated his life to a never ending battle to defend it.

Aquaman is just one of those superheroes that people love to mock. He’s a perpetual pop culture punchline and it can be a bit disheartening if you happen to be a fan. There are a lot of articles and videos on the internet offering a defence of the character that basically amounts to “he’s so badass! He’s really strong!” And while yes, he is a double-hard bastard (he once punched death in the face), I think there's more to the character than that. For example, unlike other heroes Aquaman is a world leader. If you upset him he won’t just send you to jail, he’ll invade your country. This means that Aquaman is usually involved in plenty of political intrigue, not to mention epic battles with other nation's armies. His tempestuous relationship with his wife Mera has made for lots of soap-opera, and his ancient, underwater home has been the setting for many mystical, fantasy tinged adventures.

How many other superheroes can boast the potential for such diverse stories? There's no other super-hero quite like Aquaman, except maybe Marvel's Namor, and let's face it, Namor's a wanker.

Lex Luthor manages to be the ultimate foe of the most powerful super being on the planet, despite having no superpowers of his own. He walks among other villains who can grow to giant-size, move at the speed of light or live forever, and yet they all defer to him and they all fear him.

Lex hates Superman, and a character completely driven by hate is easy to relate to. We all know what its like to feel resentment towards someone who is our superior in some way. As far as Lex is concerned, in a world without superheroes men like him would be the heroes. If he can just get rid of Superman then he'll get everything that he's due.

Lex hates Superman because he believes that everyone, deep down is as selfish and cruel as himself. Superman exposes Lex's world view as a lie. Superman, on the other hand, does what he does because he wants to inspire the best in the people of Earth. Lex displays only the worst humanity has to offer - greed, cruelty, hate. Lex is the one man who refuses to be inspired by Superman and so he exposes Superman's world view as a lie.

They could never be anything other than perfect enemies.

Barry Allen's super power isn't super speed. Well it is, blatantly, but that's not what makes him special. After all, any old Whizzer or Quicksilver can run fast. Barry's real power is imagination. Your average Joe gains the ability to run at light speed and he might go running across the planet, catching bullets and fighting crime. But Barry gets super speed and like the scientist that he is, he asks "What's next?" The incredible gift of super-speed leads to further wonders. Frictionless fabrics that fit in a ring and expand on contact with air, parallel worlds, time travel on a treadmill, complete molecular control of the body, and racing death itself.

Barry Allen has so much imagination that becoming the Fastest Man Alive was just the sound of the starter pistol.

Batman is the orphan who made himself into the ultimate Dad. It's no accident that Batman has acquired a family of Robins and Nightwings and Red Hoods and Batgirls and Spoilers and Bluebirds over the years. He may have begun as a wish fulfillment/revenge fantasy/Shadow rip-off, but as soon as Robin joined him the final piece of the puzzle clicked into place. Batman's the cleverest guy in the world and the toughest guy in the world. He lives in a giant toy box and takes you with him in his car (the fastest car in the world of course) to beat up bullies. Then it's back to the toy box where Alfred the butler/grandad has made sandwiches. His best friend is not just a policeman, he's the boss of all the police. His other best friend is Superman! And while Batman is a moody sod that just makes it mean all the more when you win his approval.


Everybody, at some point in their life, will experience power over others in some form or another. More often than not, even if our intentions are good, we will misuse or abuse that power, sometimes without even realising it. After all, power corrupts, right?

Superman is a person who will never abuse his power over others. Superman embodies the belief that when given absolute power a man won’t be corrupted by it, but rather he’ll do everything he can to make the world a better place. It’s the belief that maybe we human beings aren’t such a bunch of scumbags after all. Superman is hope for the human race.

On top that he can fly and shoot lasers out of his eyes. Bullets bounce off him. He's super strong and super fast. His childhood friends live in the 31st Century and his dog has a cape. All his friends think he's a nerd but he knows he's secretly awesome.

He's the greatest fictional character of all time. 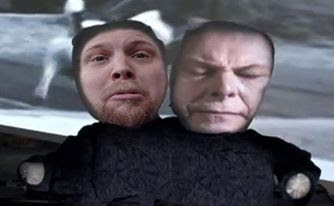