Ten Reasons Why Peter David's Aquaman is the Mutt's Nuts! 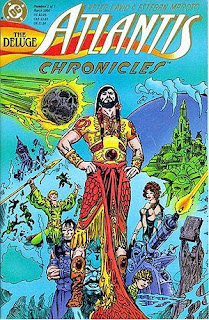 Before David started his run on the title he wrote  'The Atlantis Chronicles', a seven issue series that told the story of Aquaman's home from it's sinking right up to Aquaman's birth.  The artwork by Esteban Maroto is absolutely gorgeous and David's story is breathtaking.  The story was so grand and epic I felt like I was reading an ancient myth and yet I totally identified with the characters and genuinely cared about their fate.  It is easily one of the best comics I've ever read and yet it's never been collected in trade paperback and will probably be erased from continuity with the next Aquaman reboot.  If you ever see the series in a bargain bin or on ebay I urge you to BUY IT! 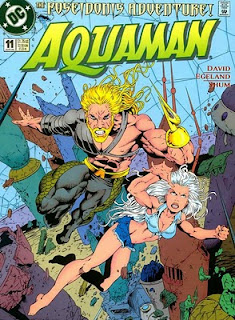 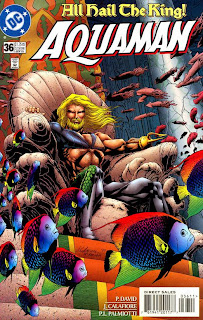 The bulk of David's run was drawn by these two guys and they're two of my favourite pencillers.  Calafiore's work has popped up in titles such as 'Deadpool', 'Exiles' and 'Gotham Underground' but I haven't seen Egelund's work on anything other than 'Aquaman'.  If you know of any other examples of his work please let me know. 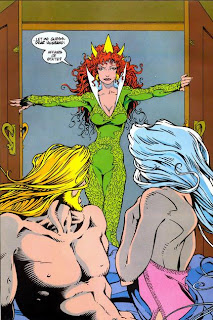 So many soap opera-esque plots!  Aquaman's estranged wife Mera catching Aquaman in bed with Forgotten Hero Dolphin!  Aquaman's efforts to bond with his angry long lost son Koryak!  Aquaman battling his half brother, Ocean Master! Aquaman's old friend Vulko plotting to overthrow him behind his back!  David's twists and turns made 'Aquaman' an underwater 'Eastenders'.  That's a good thing. 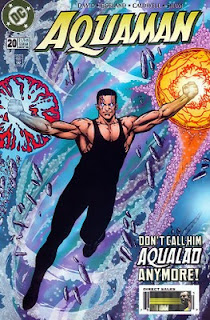 By the early '90s Aqualad and his white man's afro was a bit of a joke.  David's solution to this was simple.  He turned Aqualad into Tempest, a double-hard bastard of an underwater sorceror who was potentially more powerful than Aquaman himself!

One clever trick of David's during his run was to have certain characters voice some common fan criticisms of Aquaman.  Aquaman would then answer these criticisms by kicking his critic's ass.   This tactic was evident in issue three of the run, when Superboy stated that he was "mucking with some guy who talks to fish and sucks water" and that he was "not impressed."  Aquaman responds by hitting Superboy with a tsunami while shouting "Hey punk! Impressed yet?" 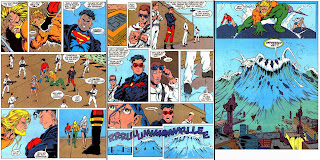 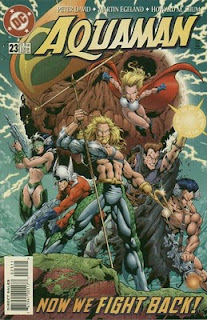 Secret Invasion?  It's no biggie for Aquaman.  The first 25 issues of David's run involved Aquaman reclaiming the throne of Atlantis and repelling an alien invasion with only a handful of his watery buddies.  He didn't need Superman, Batman or Wonder Woman.  When you're as hard as Aquaman all you need is the Sea Devils, Neptune Perkins and your own awesomeness. 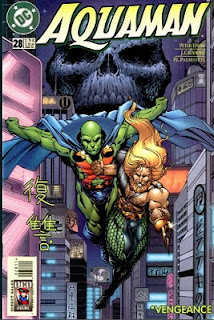 Your dolphin mother has just been brutally murdered by a cyborg who is now hiding in Japan.  The Japanese government has threatened you with retaliation if you go looking for revenge.  What do you do? Well, if you're Aquaman you jump inside the giant, ancient, sentient spaceship located underneath your city and invade Japan.  You then ban Japan from the ocean, using your aquatic minions to sink all their boats!  You'll probably find that the Japanese government give you what you want by the end of the issue. 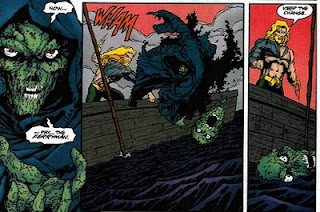 It's strange that Aquaman's currently having a hard time being dead in the pages of 'Blackest Night' considering the first time he died he wasn't all that bothered.  Apparently David had planned a big storyline where Aquaman would get killed by the god Triton.  He would be gone for a bunch of issues and then return as a water elemental.  Sadly David's superiors pissed him off one too many times and he took his ball home and buggered off to Marvel.  As a result Aquaman was dead for only one issue, during which time he fights his way out of the Kingdom of Hades by punching the Ferryman into the River Styx and chopping off one of Cerebrus' heads!  Not quite the epic storyline David had planned but it was still pretty cool. 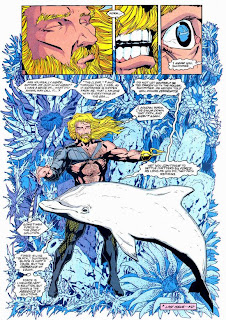 All the groundwork for David's failed plan to have Aquaman fulfil his true potential as an elemental being can be seen throughout the series.  For example, in issue 36 Aquaman discovers that he can connect to "the Clear".  Just as Swamp Thing is connected to all of Earth's plant life and Animal Man to all of it's animals, Aquaman could connect to all of Earth's sea life regardless of where he was by reaching out with his mind through "the Clear".  Of course this interesting idea was ignored by every single subsequent writer. 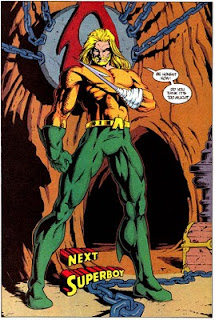 Before David could show off all these interesting ideas he had to get people to read the damn comic.  He did this by having pirhanas chew off Aquaman's hand in the second issue.  This has been criticised as an example of the type of cheap publicity stunt that was typical of '90s comics.  One of the critics of this plot twist was Kevin Smith who described the maiming of Aquaman as "sensationalistic crap"!  But say what you will about the hand loss, it got people talking about Aquaman and it got people to notice the good work that David was doing.  And bloody good work it was too!

So there we have it! Ten good reasons for you to put down that turkey leg and go to ebay or your nearest comic shop to find -
GO!