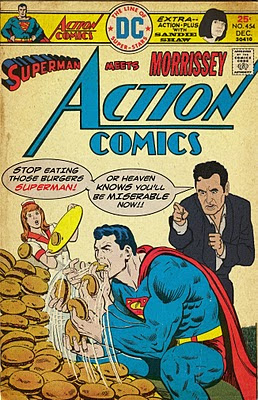 A T-shirt featuring this image can be purchased here, at bluecatstore.com

Because you demanded it! The team up of the century! The ultimate American icon meets the ultimate British icon! Who will triumph?

The original cover is Action Comics #454 (1975) and is by Bob Oksner.  Morrissey and Sandie Shaw are by me.

Update: For similar (but better) Photoshop shenanigans check out The Brave and the Bold: The Lost Issues. Now this is a guy who knows his way around Photoshop and comics a lot better than I do.

Will Self can't spell Aquaman

I have an anecdote that I often bore people to death with involving writer and intellectual Will Self and Aquaman. Now Self may think he's very clever with his award winning novels and his newspaper columns, but I know for a fact that he can't spell the name of our favourite underwater monarch. 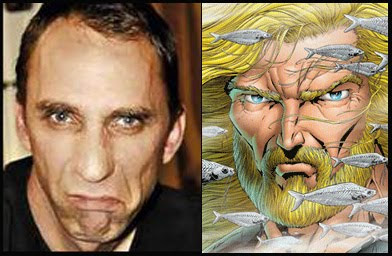 About ten years ago he was doing a performance novella in a gallery in Soho. This involved him sitting in the middle of a white room on a raised platform typing a story based on the people who came to see him. Everything he typed into his laptop was visible on a screen. The novella was then published in the Observer. He wasn't allowed to speak to anyone or make eye contact. At the end of it he asked everyone in the room (through typing rather than speaking) one by one what our hopes and fears were. He typed everyone's answers down as they spoke. Everyone was trying particularly hard to sound as clever as they could. Most people claimed they were hopeful for world peace. One gentleman claimed he was "fearful for the death of the novel as a medium." Yeah, I'm sure that was really keeping him up at night. I was racking my brains to try and think of something clever and worthy but I'm afraid the only thing I could think of was "I'm fearful 'cos my favourite comic, Aquaman is being cancelled." Dan Jurgens was writing it at the time and I was really enjoying his run. As Self typed my words he spelt Aquaman with a hyphen so I corrected him. As a result I didn't just look like moronic philistine in front of a room full of arty, intellectual Londoners, I looked like a pedantic, moronic philistine. What can I say, I'm even worse when people leave the hyphen out of Spider-Man. I may have looked like a tit , but on the other hand not many people can say they've publicly corrected Will Self's spelling of the word Aquaman.

Does anyone else out there have any stories relating to famous authors and intellectuals and their superhero ignorance? Maybe one of you has explained the Clone Saga to Salman Rushdie or helped Margaret Atwood brush up on her Hawkman continuity. Maybe Noam Chomsky needed you to tell him why the Hulk is sometimes a different colour? Let's hear about it.
2 comments: