Ask an average person on the street to describe Superman's costume & they'll describe the red & blue colour scheme, the cape, and the little red undies worn on the outside. And yet, over the past 75 years the Man of Steel has been through some costume changes that would give Marvel's super hero/fashion designer The Wasp a run for her money. Here's a list of some of my favourites. I've deliberately stuck to costumes worn by whichever version of Superman was the "main" one at the time and omitted any costume worn by Elseworld or alternate/parallel universe versions of the character.

When Superman went up against the monstrous Doomsday in their first rematch since they killed each other, he got given a new costume by the superior technology of New Genesis, in order to give him an edge. I love this costume because it's so endearingly 90s. The sword that you have to plug into your leg, the straps (especially the ones around his boots, what are they for?), the pouches, the shoulder pad (but just the one), the adorable little balaclava; there's not one aspect of this costume that doesn't look dated and absurd. But if you think about it, is it any dafter than a grown man wearing red boots, a red cape, and blue tights? Yes. Yes it is. 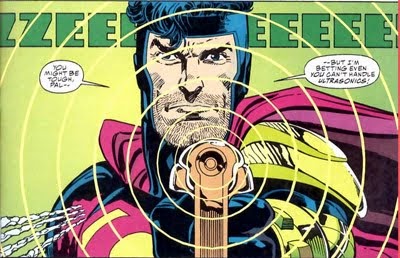 The New Krypton saga told the tale of the formerly shrunken Kryptonian city of Kandor getting re-grown and its inhabitants literally building a new planet for themselves on the other side of the Sun to Earth. How did Superman react to this? He immediately buggered off to New Krypton to serve in the New Kryptonian Army! His reason? To keep an eye on the Army's boss, the villainous General Zod. Seeing Superman train Kryptonian soldiers in non-lethal ways of using their powers was fun, and it was great to see Zod written as a multi-layered character for a while. Ultimately however the intriguing plot threads of the World of New Krypton series fizzled out as the (admittedly awesome) finale to the whole saga, Last Stand on Krypton & War of the Supermen swept everything away and returned the Superman comics to the status quo. While he was on New Krypton Superman wore a great looking militaristic uniform. It looked particularly great on the fantastic covers, drawn by Gary Frank. 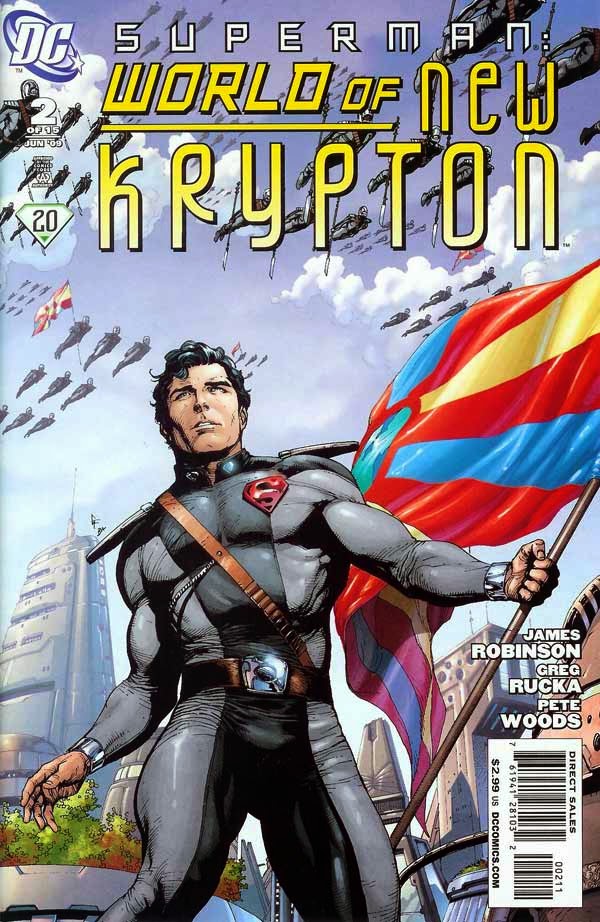 After Superman died at the hands of Doomsday it only took a few weeks sitting in a giant egg in the Fortress of solitude to get him back on his feet. It's easy to laugh at the way the newly resurrected Superman was depicted, with his mullet and giant gun, but the fact is, EVERYBODY looks cool in black and chrome, and no amount of silly hairstyles that were dated even in the 90s can change that.

Fans on the internet like to moan about how there seem to be a lot of evil alternate versions of Superman running around theses days. They claim that the evil, corrupted Supermen appearing in titles such as Injustice: Gods Among Us (driven barmy by the death of Lois) and Earth 2 (corrupted by Darkseid and driven barmy by the death of Lois) are indicative of the cynical view DC have of their greatest hero. What these fans forget is that Superman has been corrupted by Darkseid before, and he wasn't even an alternate version of the character, he was the real deal! In Adventures of Superman #426 Darkseid's lackey, Amazing Grace hypnotises Superman into believing he's Darkseid's evil son. While under her influence he tricks a group of revolutionaries into following him to their doom, and has hot, jacuzzi loving with Grace! He's eventually de-programmed by Lightray and Orion, who opt not to tell him about the evil shit he got up to for fear of traumatising him. So, unlike in Earth 2 and Injustice, Superman never faced any of the consequences of his evil deeds! Still, it was quite a good story, and the Kirby-esque costume looked cool. 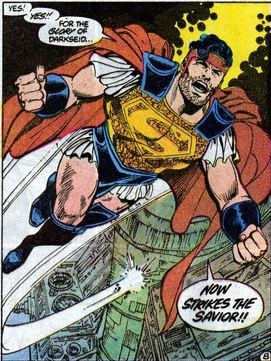 Superman is currently wearing a suit of Kryptonian armour that's attuned to his DNA and as a result will automatically display his family's crest (the 'S'). It's got a lot of detractors but I quite like it. I like the darker shade of blue and I think the red belt and sleeve seams really work. However I must admit, I don't really like the collar, it looks too militaristic. There's also the fact that this costume only looks good when drawn by certain artists. Jim Lee (it's designer), Aaron Kuder, John Romita Jr and Ivan Reis all make this costume look great, but there are many other artists who can't seem to wrap their heads around the costume's many seams, and as a result they make it look chunky, blocky and clumsy. I don't think this costume has the timelessness of the classic one and I won't be surprised if it's eventually ditched. I'm quite happy to see Superman wearing it in the mean time though, especially as long as Lee, Kuder, Romita, and Reis are working for DC.

For reasons that the Super-writers at the time never bothered to adequately explain, Superman got a new look and funky new electric powers for a year in the 90s. He even split into two different electrical beings, a red one and a blue one! Everybody hates this look, but I really like it. I think the main reason for my love of ol' Bluey is that my main experience at the time of the look was through Grant Morrison and Howard Porter's superb JLA. Porter never failed to make Superman Blue look cool, and Morrison always had him doing awesome things, like wrestling angels or holding up the moon. As for the solo Superman comics that featured the Electric look, I didn't read them at the time but checked a lot of them out years later. They weren't bad stories, but the soap opera had definitely started to outweigh the action, and I can see why DC were using Electric Blue gimmicks to inject a bit of life into their comics. Still, having said that, there was one particular Superman Annual that featured a cool cowboy variant of the electric Blue costume. 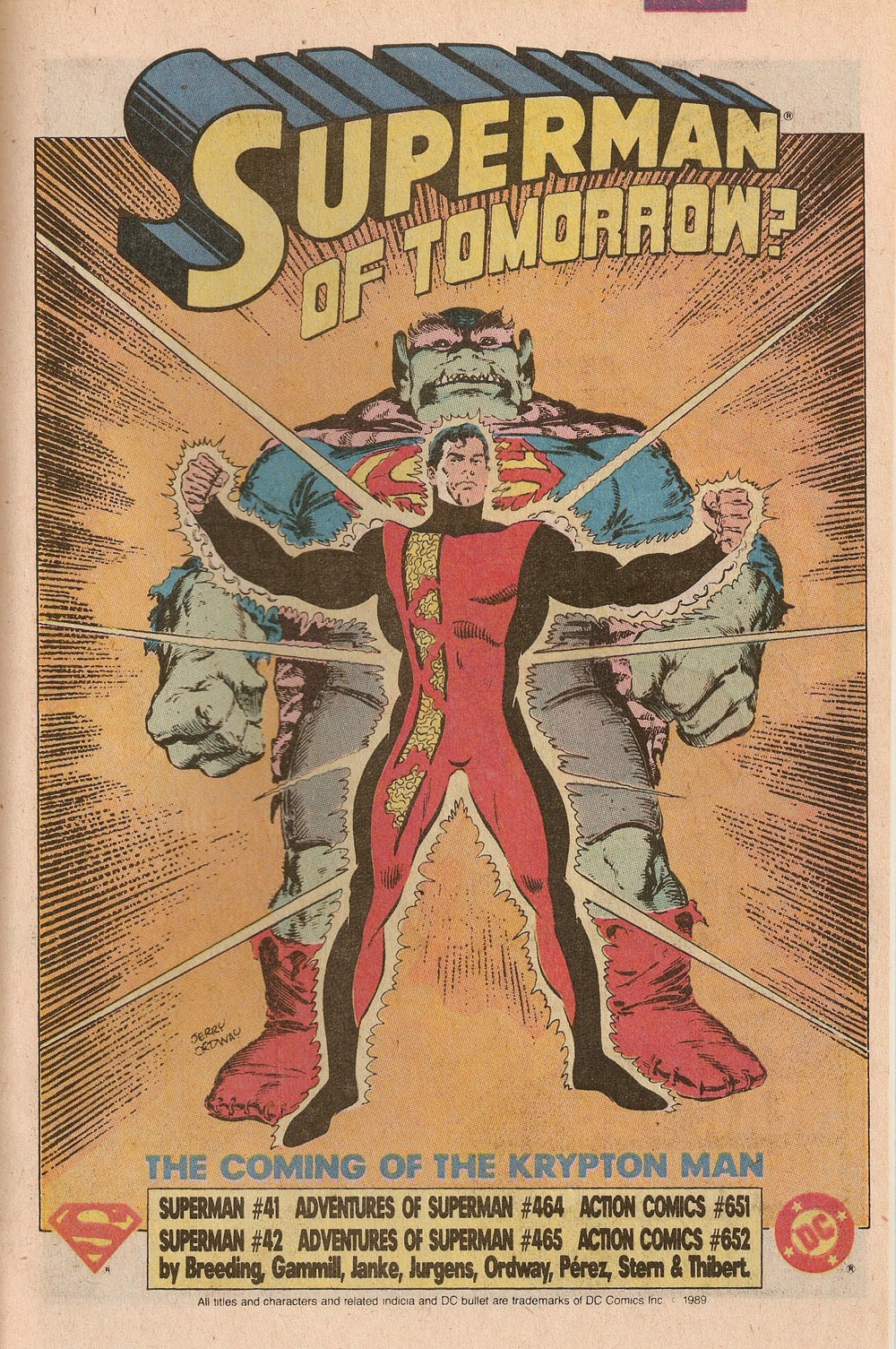 During the late '80s/early '90s Superman was forever getting mind controlled or brain-washed. In one particularly memorable arc he was turned into a cold, logical, and surprisingly violent version of himself by a Kryptonian artifact called the Eradicator. The Eradicator's mission was to preserve Kryptonian culture at all costs, and since everybody on Krypton was a massive arsehole when it blew up, the Eradicator saw turning Superman into a Super-Prat as the only way of fulfilling his task. Super-Prat had an awesome costume based on John Byrne's designs for Kryptonian clothing. It was such a cool design that a variation of it was used eleven years later in the pages of Mark Waid and Bryan Hitch's JLA run.

Superman exiled himself into space for a while during the 80s and eventually ended up forced to fight in a gladiatorial arena on the evil Mongul's Warworld. The sight of a hairy, semi-naked Superman standing over his fallen foe and defying Mongul's orders to finish the job with a cry of "I'm Superman and I don't kill!" remains one of the coolest things ever seen in super-hero comics. I recently saw someone on Twitter describe the aforementioned scene as depicting an aspect of Superman that's been forgotten by the makers of the recent Man of Steel movie. The Tweeter was referring to his or her displeasure at the fact that (SPOILERS) the film ended with Superman killing General Zod. Of course, what the disgruntled Tweeter had apparently forgotten was that the very reason Superman exiled himself into space and ended up in Mongul's arena in the first place was because he was going barmy with guilt from his descison to kill General Zod!

Okay, so the emblem and boots were slightly different when he first appeared but this costume (or slight variations of it) was Superman's uniform for 73 years. It's one of the most iconic superhero costumes ever and like it's wearer, it's the template for everything that came afterwards. I've never really understood why DC's current regime seem almost embarassed by the red underwear. The knickers have been the butt of some jokes over the years, but in the context of the costume they really work. As far as I'm concerned it's a truly timeless costume and will never look dated. It always looks great, even in the hands of the weakest artists. I'm not really bothered about the fact that Superman no longer wears it as I remain confident that it will eventually return. In the meantime I'm happy to enjoy his new look. Despite my love of this costume however, it's not my favourite. That honour resides with our final costume....

For me, the best thing to come out of DC Comics' 2011 relaunch, The New 52, was this costume. According to current continuity when Superman first debuted he wore a t-shirt, jeans, boots and the indestructible cape he was wrapped in as a baby. This costume represents everything that's amazing about Superman. While wearing this costume he looks every inch the working class champion of the opressed and basher of bullies that his creators, Jerry Siegel & Joe Shuster intended him to be. He looks like a real Kansas farm boy, and yet the cape is there as a reminder of his alien heritage. It almost seems as if Superman has tried to create a facsimile of Kryptonian garb with whatever he had to hand. The t-shirts come in different colours too, so we can get an occasional break from the blue, and the whole thing looks very dramatic whenever it's battle damaged and torn. In my opinion, this is the coolest thing Superman's ever worn and if I had my way he'd wear it all the time. 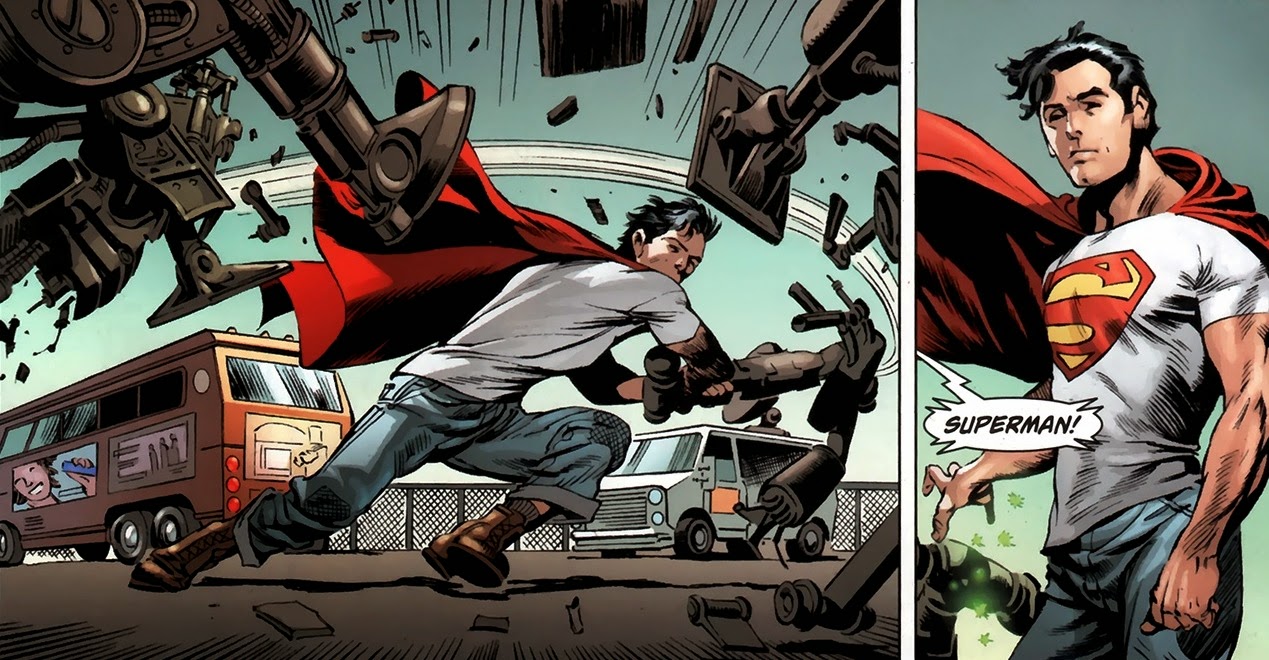 There's my Top Ten Best Superman Costumes, at least of those worn by a non-Elseworld Superman in the comics. What have I missed? What are your favourites?

Also, for a further glimpse of the many and varied looks Superman has adopted over the years, check out Siskoid's ongoing 'Reign of the Supermen' articles.