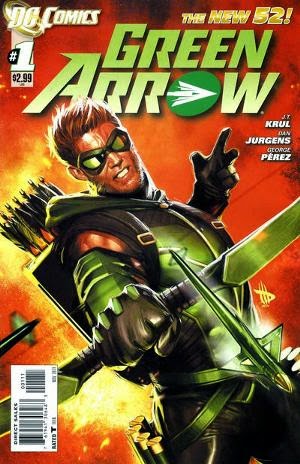 I am currently enjoying the hell out of the Green Arrow TV series Arrow, and have recently purchased and thoroughly enjoyed Jeff Lemire and Andrea Sorrentino's Green Arrow Vol. 4 - The Kill Machine. It's fair to say that I'm currently having a bit of a thing for Green Arrow. It was in this spirit that I purchased J.T. Krul, Dan Jurgens, Keith Giffen & George Perez' Green Arrow Vol 1: The Midas Touch. Unfortunately, not even the enormous amount of love and good will I'm feeling towards the Emerald Archer at the moment could compel me to give this very mediocre book a positive review.

In 2011 DC Comics relaunched their entire line of superhero comics under the banner of 'The New 52'. This collection is the first six issues of the relaunched Green Arrow. One of the intentions of the New 52 was to provide a jumping on point for teens to get into superhero comics. In this collection the writers have paid lip service to this notion by having a much younger than usual Green Arrow battle thoroughly modern baddies who upload videos of their crimes to the internet. And yet this attempt at a modern take on GA and his foes is completely undermined by the writers' frankly bizarre decision to have GA constantly moaning and griping about how kids today celebrate the bad guys in popular culture and play too many violent video games. The finale of the first arc is literally GA lecturing the audience from a podium about the perils of modern technology. DC Comics have handed Krul, Jurgens and Giffen a hip, funky, modern, young Green Arrow for the 21st Century and they've bizarrely chosen to portray him as an out of touch, Daily Mail reading type, trapped in a world he never made and harrumphing at the wayward youth of today, with their Youtubes and Playstations.

The unimaginative villains don't help the overall dated vibe either. The titular Midas for example, is a misunderstood, tragic, gloopy, scientist-cum- monster of the sort we've seen a billion times in comics over the years. There are some other villains too who are so uninspired I had too Google them as I'd actually forgotten what they were called. Apparently they're called Doppelganger, Dynamix, Supercharge, Rush, Stunner and Blood Rose, names that wouldn't look out of place in just about any 90s Marvel comic. In fact as I write this I'm remembering that Stunner, Blood Rose, and Supercharge(r) were actually the names of three 90s Marvel villains!

Dan Jurgens and George Perez' art is very good, but theirs is a style that, while easy on the eye, is very reminiscent of the 80s and 90s comics that made them big names. By itself this wouldn't be a problem, but add the old school art to the crappy villains and the writers' baffling decision to write GA as an elderly UKIP voter and you've got a recipe for a comic that's the complete antithesis of the New 52.

Overall it's not a terrible collection but as a relaunch designed to pull in new readers it's just too old and stuffy in its outlook. If anyone's looking to get into Green Arrow comics I recommend you skip straight to the superb Green Arrow Vol. 4 - The Kill Machine. You will literally miss nothing.