Flash Fact: Wally West is brilliant but it's time for Barry Allen


In 1985 Barry Allen, The Flash, died saving the Universe. The mantle of The Flash was taken up by his sidekick Wally West, who served as DC Comics' main Flash until 2006 when Barry Allen's grandson Bart briefly took over.  Wally soon returned as the Flash but was joined in 2008 by a resurrected Barry Allen.  Barry is now once again the main Flash, while Wally has taken something of a back seat and is currently not appearing regularly in any DC titles.  This is a controversial move among Flash fans as Wally has developed quite a devoted following over the past 25 years.  I would argue however that DC has made the right decision.  Barry needed to come back and Wally needs some time away, but not because of any failing on the part of Wally as a character.  In fact I would say that Wally has been too well written for his own good.

When The Flash was relaunched in 1987 writer Mike Baron wrote Wally West as a promiscuous, arrogant prat, as far removed in personality from Barry Allen as any character could be.  This was a genius move for many reasons.  For a start, if Wally had been exactly the same as Barry then Barry's death would have been rendered pointless.  Also, this was the mid '80s and in making Wally a bit of a selfish womaniser, Baron very much made him your quintessential '80s man. But the biggest advantage of portraying Wally as a bit of an arsehole was the fact that we got to see Wally grow and mature before our very eyes as the series progressed.


When Baron left after issue 14, William Messner-Loebs took over and carried on developing and maturing Wally.  Under Messner-Loebs we saw Wally humbled and forced to temporarily live on the streets.  We saw him begin to appreciate his friends more and become less of a user.  We saw his relationship with his clingy mother and wannabe super-villain father develop.  By the time Messner-Loebs left the book Wally was a much more likeable guy. But his journey wasn't over.  Mark Waid was the next writer to chronicle Wally's adventures and he continued to send Wally on his path to maturity. Under Waid for example, Wally ended his womanising and began to settle down with a long term girlfriend, journalist Linda Park.  But Waid also did something very important.  Waid recognised that while Wally had worked through a lot of his issues there was still something he had yet to come to terms with.  The legacy of Barry Allen. During Waid's run we saw Wally come to terms with Barry's death and grow comfortable with the fact that he was beginning to surpass his mentor in terms of both power and achievement.


Wally's understanding and control of his speed was very much tied to this emotional journey he was taking.  When Baron reintroduced the character his top speed was 705 mph and he had to eat and drink huge amounts in order to replenish the energy he expended while running.  We gradually got to see Wally get faster and faster and look more closely into the nature of his powers as he did so.  Messner-Loebs first indicated that there may be more to Wally's powers than meets the eye when he had Wally's scientist friend, Tina McGee note that Barry Allen's powers were physically impossible and he may have become something other than human when he gained his powers.  Waid took this idea and developed it further. He had Wally meet Max Mercury, a Golden Age speedster who was the zen guru of speed.  Under Max's tutelage Wally discovered the Speed Force, the extra-dimensional source of all super speed. Wally soon learnt to control the Speed Force and gained speed and abilities beyond anything any speedster had achieved previously.


By the time Waid left and Geoff Johns took over Wally had married Linda and become a master of the Speed Force.  Johns took some of the focus away from Wally and concentrated on the development of other characters.  For example, Flash's famous Rouge's Gallery enjoyed more character development under Johns than they had ever experienced before.  Despite this Johns continued to allow Wally to change and grow.  During Johns' run Wally began to forge an identity for himself as a blue collared hero of the people with his feet planted firmly on the ground.  He also regained his secret identity and fathered twins with Linda.


The wonderful thing about Wally's Flash series was that despite the change of writers Wally underwent a real journey over the course of two decades, with characterisation that was so consistent that he is perhaps one of the most fully realised characters in the DC stable.  However, it is this wonderful character development that has proved the character's undoing.  After undertaking the journey from a selfish underpowered hothead to a super powerful, heroic and responsible father of two, Wally has nowhere else to go as a character, at least for the moment.  This was proven by the way the character has floundered somewhat over the past five years or so.  First he was replaced by Bart Allen as the Flash and then he returned in some very underwhelming Mark Waid penned stories.  It was hard not to get the impression that DC had no idea what to do with Wally.  This is why I totally agree with DC's decision to bring Barry Allen back to life and take Wally out of the limelight for a while.  I would much prefer not to see Wally for a bit rather than see him star in a bunch of mediocre, directionless stories or worse still, get killed off.


As for Barry, Geoff Johns has done a fantastic job of returning him to the DC Universe.  Flash: Rebirth, the story in which Barry's return is explained, sold well but has had it's fair share of online detractors.  Personally I loved it.  Johns establishes that while Wally is the master of the Speed Force, Barry is its source.  Barry actually generates the Speed Force with each step he takes.  The Speed Force reaches through time, which explains why Barry's predecessor, Jay Garrick is also connected to it.  This, in my opinion, is a fantastic continuation of themes established not only during Waid's run but as far back as Messner-Loebs' run, when Tina McGee questioned Barry Allen's status as a human being.  It is also incredibly apt in the way it mirrors real life.  Without Barry, Jay Garrick would probably have been forgotten and Wally would never have been created.  Barry is very much the source of Wally and Jay's "power" in reality, as well as in the pages of the comic.


Flash: Rebirth also sees the return of Barry's arch enemy, Professor Zoom, The Reverse Flash.  It seems that Zoom is powered by a negative Speed Force and is responsible for Barry's return.  Zoom wanted to not only undermine Barry's myth by negating his sacrifice but also to continue making Barry's life a misery.  Zoom actually goes back in time and kills Barry's mother, framing his father for the crime.  The mystery surrounding his mother's death and the desire to clear his father's name drives Barry into a career as a police scientist and strengthens his desire for justice.  With this tweak of continuity Johns has made Barry a far deeper character than he was when he died.  This change also helped to further distinguish Barry from Wally, who is motivated more from the love of his powers and the desire to carry on Barry's legacy than from tragedy.


Geoff Johns' new Flash series starring Barry Allen has been brilliant so far.  It's certainley slower paced than Johns' Wally stories, but I think that has more to do with the differences between Barry and Wally as characters than any failing on Johns' part.  Thanks to Johns, and Barry of course, The Flash comic has a clear identity and direction once again.  In fact, Johns is building up to a big Flash-related event in 2011, Flashpoint.  But I'm sure Wally's story isn't over.  In 1985 DC felt they could go no further with Barry Allen and so they killed him off and he remained dead for 23 years.  Despite his absence from the books, Wally is very much still alive and I remain confident that it will be a lot sooner than 23 years before we see him take an active role in the DC Universe once again. 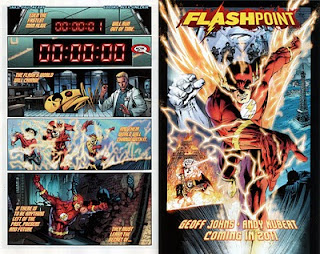