The Science of Obscure Superheroes Part Four: The Red Bee

Recently I gave a talk for the Reading branch of the British Science Association on the subject of the science of superheroes. It's a subject that's been covered a great deal elsewhere and so I wanted to approach it from a different angle. I decided to focus on the science behind some lesser known superheroes. I chose to discuss The Whizzer, Chunk, Matter Eater Lad, and the Red Bee. I looked at their powers and origin stories and tried to find parallels in real world science. I've adapted my talk into a four part article. This part is about The Red Bee. 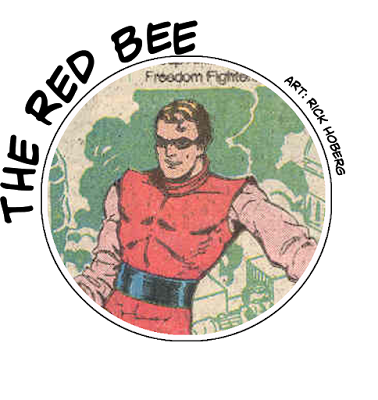 The Red Bee first appeared in Hit Comics #1 (1940). His name is Richard Raleigh, an assistant district attorney who decides to dress up in a puffy shirt and fight crime using bees! Red Bee uses lots of trained bees to fight Nazis and gangsters, but his favourite bee is called Michael. Michael lives in Red Bee’s hollow belt buckle and will only come out for special missions. The character starred in 24 issues of Hit Comics before fading into obscurity. He was brought back in the pages of All Star Squadron in the early ‘80s, only to be killed off straight away.

Let’s talk about Michael. Surely bees hang about together in huge swarms and inhabit hives - they don’t sit on their own in some bloke’s belt buckle? Well, there are in fact certain types of bees that do prefer a solitary existence. For example, there is a type of bee found in the UK called Osmia bicornis, or more commonly, the red mason bee!

Red mason bees are usually found in gardens and parks. They nest in existing holes or cavities, such as mortar joints, window frames, or dead wood, and prefer holes in sunny south facing locations. It’s not a massive stretch to believe that Richard Raleigh could have tempted such a bee into his belt buckle, provided he was thrusting his hips towards the sun.

Michael is probably a female, as male mason bees tend to hang around the nests where they first hatched from their cocoon, waiting to have sex, before dying soon after the deed is done. That’s very much what the kids call a “big mood” for me.

When the females have chosen a place to make their nest they harvest mud which they use to seal up their nest cells, allowing their young to safely develop, keeping them warm over winter.  Red Bee’s belt buckle would probably be full of mud.

While Michael wouldn’t make much of a weapon, the Red Bee’s other bees could potentially be a tenacious foe for any criminal that crossed their path. Africanised “killer” bees from Central America have been known to chase a person into water and then patiently wait for them to resurface before stinging them. These bees can recognise the chemical scent of the breath of their target as air bubbles break the surface of the water.

Honeybees in the UK are less aggressive but are still known to be pretty tenacious. In 2016 a grandmother from West Wales returned from her shopping to find a swarm of over 20,000 bees covering the back of her car. She called some local beekeepers, who were able to remove the bees and she returned home. Over 24 hours later, outside her home she found the bees had returned to the car! The beekeepers theorised that the queen bee may have become trapped somewhere in the car.

So bees could potentially be an effective weapon against anyone who provoked them, but how could the Red Bee control them? How could he make sure the bees attacked the gangsters and not him? Smoke can be used to make bees docile, but dopey bees might not be much use in the war against crime. Is there an alternative?

The answer is smells!

In 2007 researchers in the University of Otago found that a queen bee can manipulate worker bee’s behaviour by releasing a pheromone that blocks aversive learning in young bees. This means that the queen can stop her offspring from learning from bad experiences. This is necessary because being exposed to a chemical scent that stops you from growing ovaries can be pretty unpleasant for a worker bee. By preventing the young bees from developing aversive memories against her odour the queen is ensuring that they will continue to tend her. Basically, she smells bad but she makes the other bees forget how bad she smells.

If The Red Bee could harness these chemical scents, perhaps he could use them to convince a colony of bees that he was their queen! If they ever decided that they didn’t like the life of a crime fighter, he could make them forget that decision! A real life Red Bee would perhaps be, not a man in a domino mask and a puffy shirt, but a stinky, insect drag queen, armed with water pistols full of bee sweat!

But being a queen bee is not all it’s cracked up to be. When a queen bee gets too old to give off the right smells they are replaced by the workers in a procedure known as "supersedure". The workers rear a replacement queen and when the new one is ready the workers will kill the old one in a gruesome fashion. The workers cluster tightly around her, “balling” her until she becomes so hot she dies.

If the Red Bee is a man who would be queen he must ensure he never runs out of scent, lest he is balled to death by his insect minions! 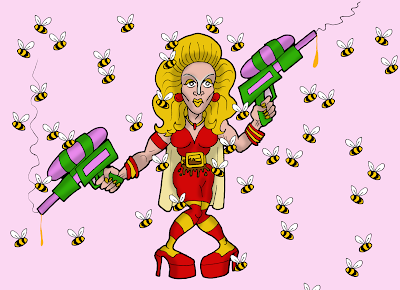 Many thanks to insect experts Jade Hailes and Antonia Forster.