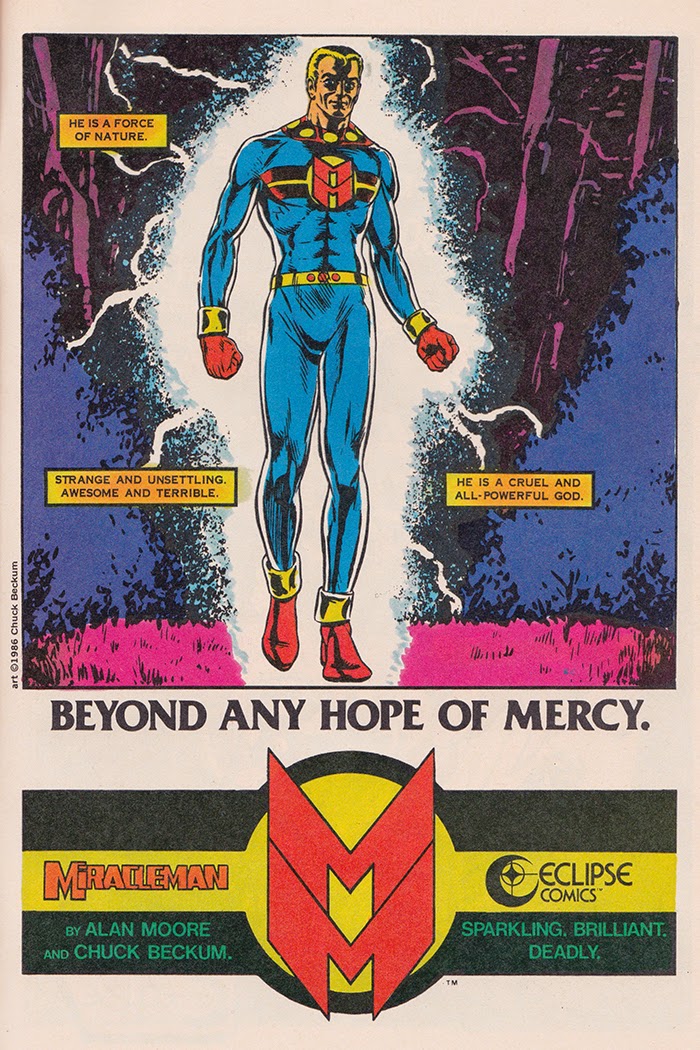 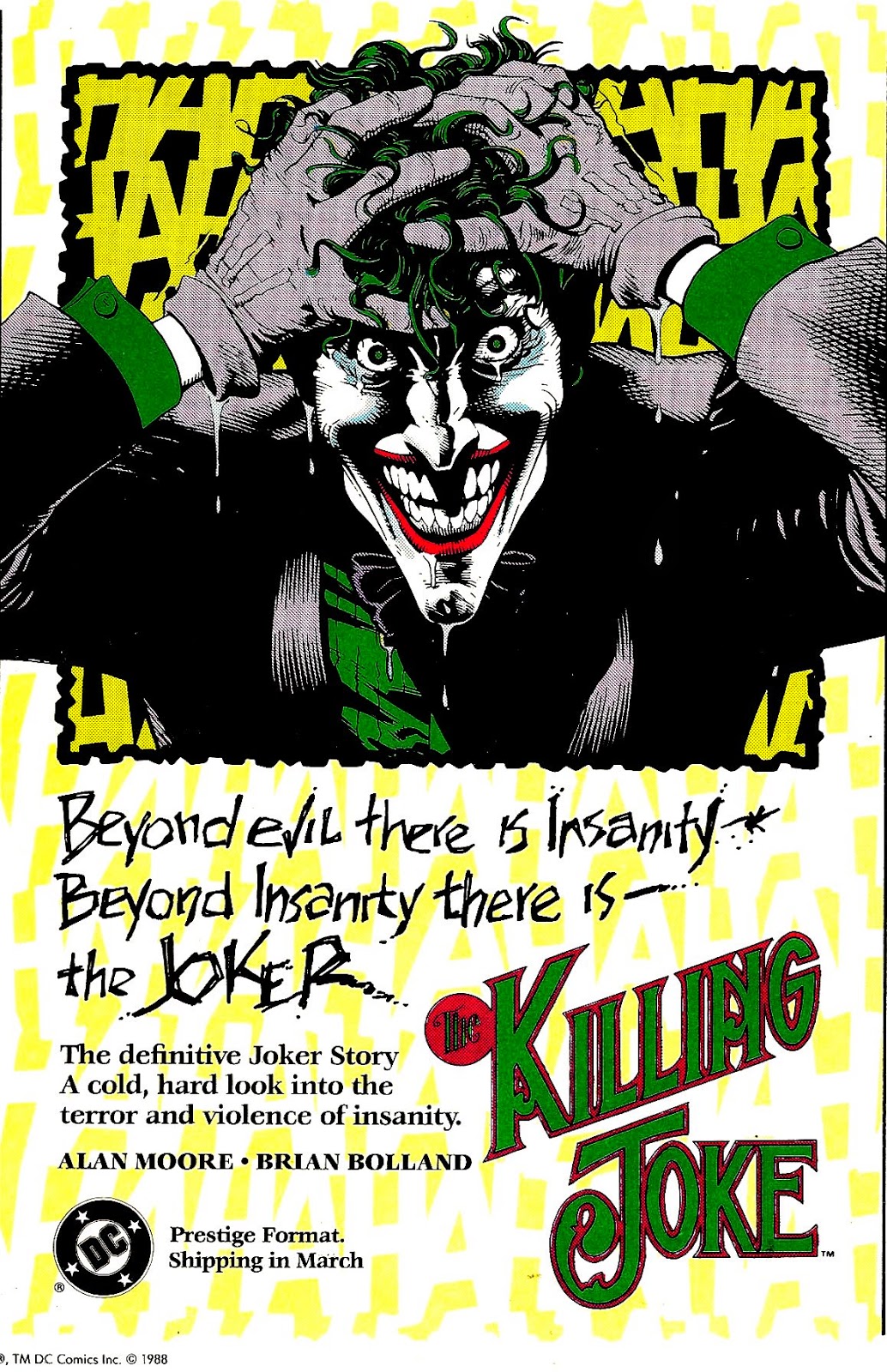 Alan Moore and Grant Morrison are two of my favourite comic creators. They've both got gigantic imaginations and have both found ways of looking at the superhero genre that have changed it forever. They also have a long running feud with each other, which is always good for a laugh.

Whenever Moore has commented on Morrison's work it's always in a dismissive, catty way that frankly is a bit beneath him. Morrison on the other hand is a big fan of Moore's work and always has something interesting to say about it.

Based on the old 1950s Marvelman strips by Mick Anglo, Miracleman tells the story of a middle-aged man called Michael Moran who one day remembers that he can turn into a superhero. Like Moore's other '80s masterpiece Watchmen, Miracleman takes the superhero archetype to its logical and terrifying conclusion. Moore's run on the character ends with Miracleman and his superhero friends destroying London in a brutal battle with a supervillain and building a new worldwide Utopia out of the city's ashes. The heroes reign over a peaceful, happy planet from a new Mount Olympus, and human beings have absolutely no say in the matter.

In a 2011 article for the Guardian Morrison wrote:


By the end of the story the characters find out that they've been lied to all their lives, and they emerge into the real world. There are beautiful sequences where the superheroes are escorting Thatcher out of No 10 and she's sobbing helplessly: suddenly there's this new power that bombs can't stop, weapons can't stop. The whole last issue is this fabulous liberal fantasy of what the good guys would do if they got in charge and got rid of all the bastards! I like it much more than Watchmen; it was a real triumph for lefties everywhere!

I prefer it to Watchmen too, but the fact that Morrison interprets the ending as a joyful fantasy is frankly, a little disturbing.

For me, the ending to Moore's Miracleman is absolutely terrifying. Between them the heroes decide that they know what's best for the world. Humankind in it's entirety is reduced to the role of a naughty child who needs to be told what's good for it. The fact that the heroes effectively enslave mankind with such kindness and benevolence makes it even more creepy and disturbing. It never even occurs to them to ask what we want, and they're so far removed from us that they don't even realise what they're taking from us. 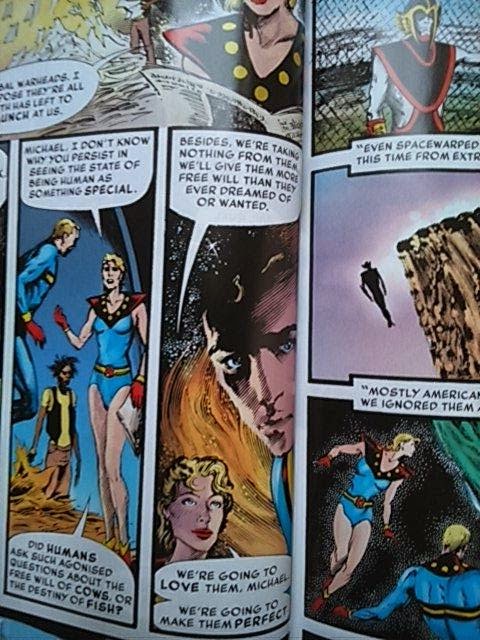 By the end of Moore's run there's no money and no crime, and humanity is marching towards a superhuman future through the sharing of alien technology and a programme of eugenics. The very last page depicts Miracleman looking down on his new world, baffled and bemused because his wife Liz turned down his offer of a place among the gods and wants nothing more to do with him and his "perfection". It's a brilliant and powerful ending that never fails to stay with me for days, no matter how many times I read it.

And Morrison apparently interprets it as, "Yay, the good guys won!" 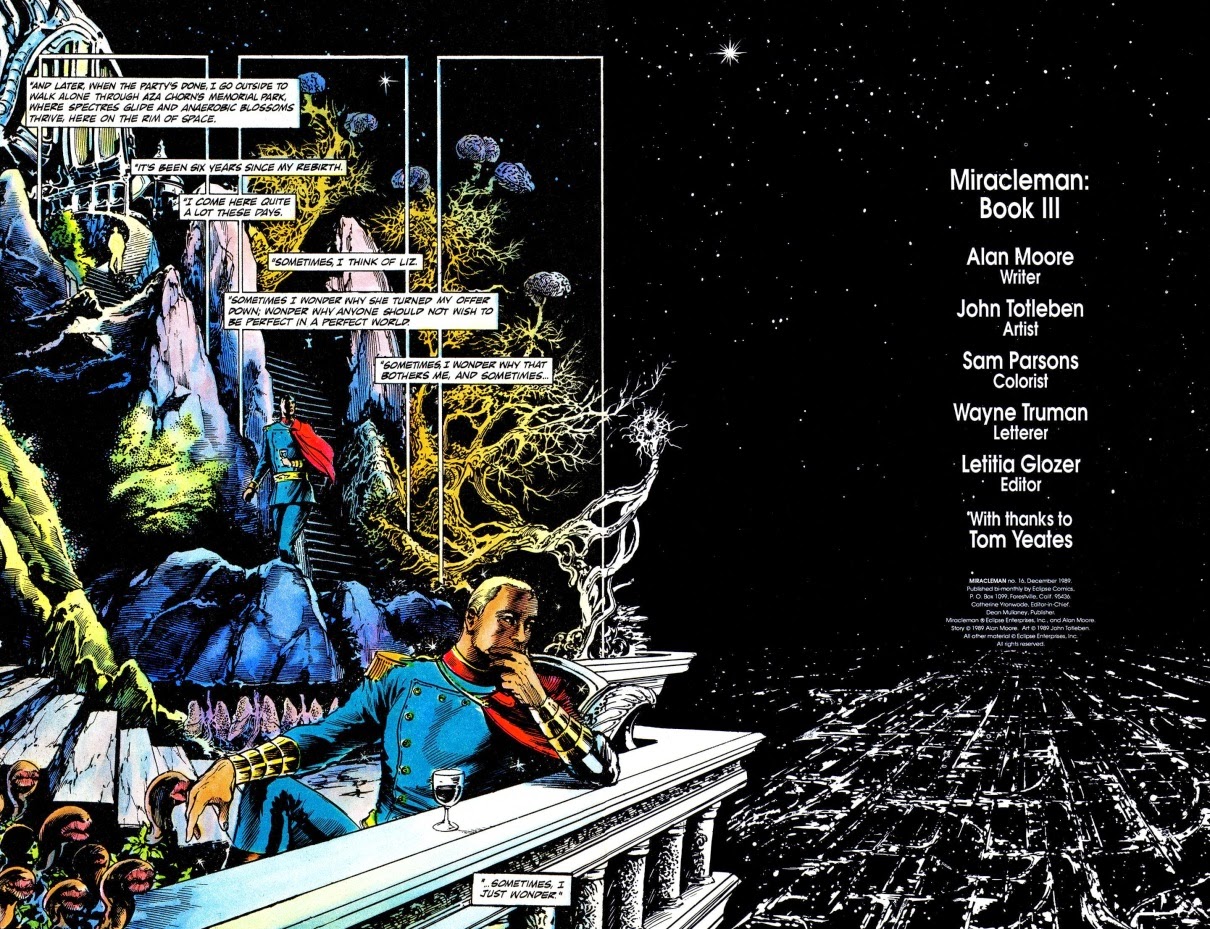 The Margaret Thatcher scene that Morrison describes is perfect example of where he and I differ on our interpretation of Miracleman. I'm by no means a fan of Thatcher or her politics but this is a scene where one of the most influential and forceful world leaders of the 20th Century is reduced to a gibbering wreck by the realisation that humankind is no longer in control of its own destiny. To come away from it saying "Hurray, take that Maggie" seems a little childish to me. 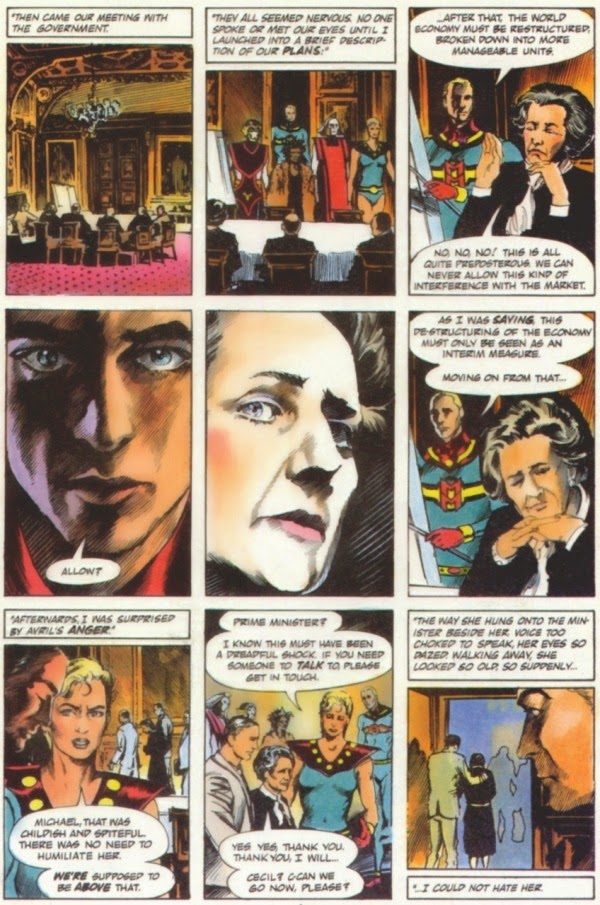 Morrison on The Killing Joke
(WARNING: LOADS OF SPOILERS)

The Killing Joke chronicles the Joker's attempts to prove to Batman that one bad day can drive anyone insane. Joker sets out to drive Jim Gordon mad by crippling his daughter Barbara (AKA Batgirl) and forcing him to look at pictures of her wounded body. (Yeah, it's pretty grim). Running parallel to this story is a flashback to Joker's own "bad day", the events that bleached his face and broke his mind. Batman eventually rescues Gordon who implores him to bring Joker in "by the book." Batman has a final confrontation with his arch foe that ends, unexpectedly, with the Joker telling Batman a joke. The pair of them laugh together as the police arrive. 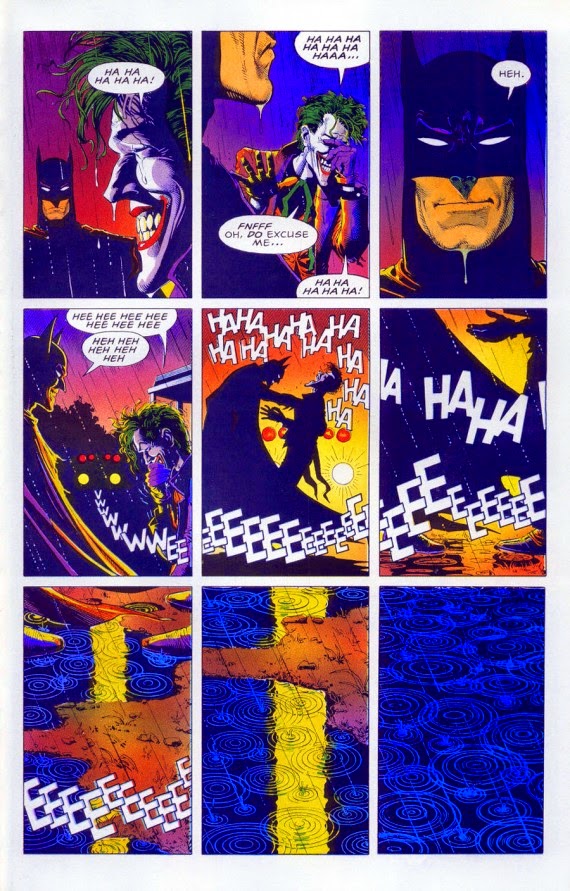 While Moore never intended the story to be "canon" the events of the story were nevertheless expanded on by subsequent writers. Barbara Gordon, for example, spent the next twenty or so years in a wheelchair. As a result it was always assumed by most people, including myself, that the story did indeed end with the Joker's arrest. Morrison had other ideas. As he told Kevin Smith in a 2013 interview:


That’s why it’s called ‘The Killing Joke.’ The Joker tells the ‘Killing Joke’ at the end, Batman reaches out and breaks his neck, and that’s why the laughter stops and the light goes out, ’cause that was the last chance at crossing that bridge. And Alan Moore wrote the ultimate Batman/Joker story — he finished it.

While this doesn't appear to have been Moore's intention this is now the only interpretation of the ending that makes sense to me. After hearing Morrison's take, The Killing Joke changed for me into something a hundred times more satisfying than it had previously been.

The story begins with Batman offering the Joker a chance to get off their path of mutually assured destruction. When the story actually ends with that prophesied destruction coming about then that first scene becomes so much more significant and poignant. Batman begins the story still trying to convince himself that there's a way out for both of them, but by the end he's realised there's no hope. The Joker tells a joke about two lunatics escaping from an insane asylum, and the Batman realises that they are the two lunatics. He realises that their dance towards the inevitable is going to hurt more and more people the longer it goes on. He realises there's only one way out and the realisation breaks him. The Joker is trying to prove to Batman that one "bad day" can drive a man insane. The Killing Joke is the story of Batman's "bad day". His "bad day" is not the day his parents were killed (as the Joker speculates at one point), it's the day the Joker wins and Batman breaks his oath never to kill.

Hey, I'm not saying it's the happiest interpretation, but it is I believe, the most satisfying.

Morrison's ending also changes the nature of the Joker's assault of Barbara Gordon. If the story is canon then Barbara's fate is needlessly vicious. We know Joker's a nasty bastard, we don't need a character as significant as Barbara to become collateral damage in order to prove that. It does very little to change Batman and Joker's relationship and does nothing at all for Barbara. (Indeed, it was John Ostrander who used her injury to develop her character in the pages of Suicide Squad.) But if this story is the last ever Batman/Joker story then the assault of Barbara Gordon becomes the worst thing the Joker has ever done, the thing that helps tip Batman over the edge. The nastiness is justified.

For me Morrison's interpretation turns a good story into a great story. And while it wasn't Moore's intention for Batman to kill the Joker, artist Brian Bolland has implied that it was his, so at least half of The Killing Joke's creative team agrees with Morrison. 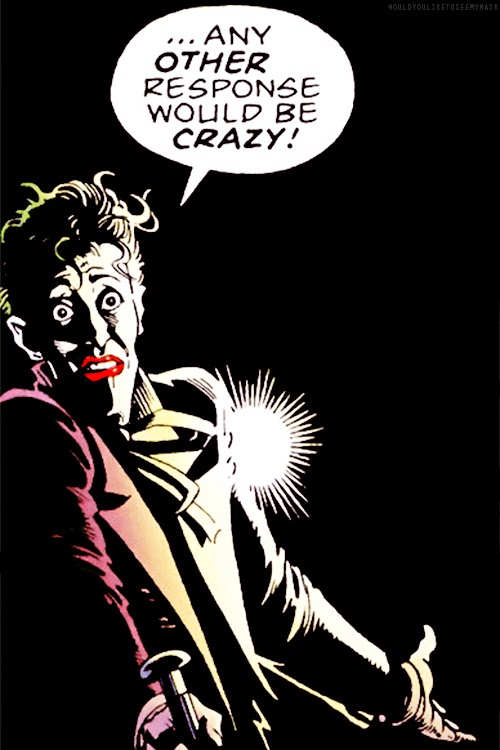 Regardless of whether I agree with him or not it's always fascinating to read the opinion of a genius like Morrison on the work of a genius like Moore. It's a shame they don't get on because Morrison can enrich Moore's work just by discussing it, and I'm sure if he ever actually gave it a fair chance Moore could do the same for Morrison's work.

Having said that, if his opinion on Miracleman is anything to go by, I hope to god Grant Morrison never gets super-powers.