Why I love John Byrne's Superman: Man of Steel

Next week sees the release of Action Comics #1 by Grant Morrison and Rags Morales.  Action Comics #1 is the start of a complete reboot of the Superman mythos. DC Comics aim to present a fresh new take on Superman in order to bring in a new generation of fans.  Will it work?  Who knows? All I can say is that it's worked before, and I'm living proof.  As a child I grew up reading reprints of old Silver and Bronze Age Superman stories, as well as my dad's old DC Comics from when he was a child.  I always enjoyed reading about Superman but never really connected with the character in the same way I did with Batman or Spider-Man.  That is until I read John Byrne's Man of Steel. 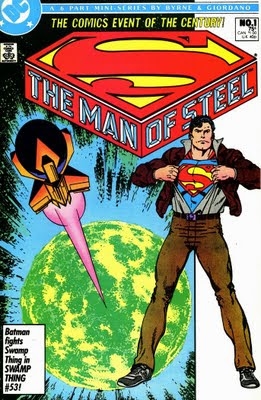 Man of Steel (1986) was a six part mini-series that had exactly the same purpose as next week's Action Comics #1; to reboot Superman and pull in new readers.  I first read Man of Steel when I was eleven years old and it blew me away.  Everything about the character that I had previously found dull and predictable seemed to have changed.  Let's take a look at some of those changes.


Let's face it, Superman's acting like a complete knob-head here. Flash would have been well within his rights to give Superman the finger and leave the miserable git to do monitor duty by himself.  Unfortunately this scene wasn't an isolated incident.  To me, Superman always seemed to be banging on about how awesome Krypton was and as a child from good ol' Planet Earth I couldn't help but feel somewhat slighted by this. After all, Superman had spent most of his life on Earth, his adopted parents raised him here, his job and his friends were here, all his stuff was here.  Would he really be pining after Krypton so much that he'd be prepared to get all up in Flash's face just for pointing out how pretty the Earth looked?

Byrne decided not to depict Superman as a lonely alien, longing for a dead world and instead decided to put the emphasis on the human side of a character who had been raised on Earth.  In Man of Steel, what Clark Kent had gained from his upbringing by the Kents was a much more important part of what made him Superman than his Kryptonian heritage.  Indeed, unlike with previous versions of the character, Ma and Pa Kent were still alive and still an active influence in Superman's life.  Superman was now an Earthman first and a Kryptonian second.  As Superman himself put it in Man of Steel #6 "It was Krypton that made me Superman, but it is the Earth that makes me Human!" 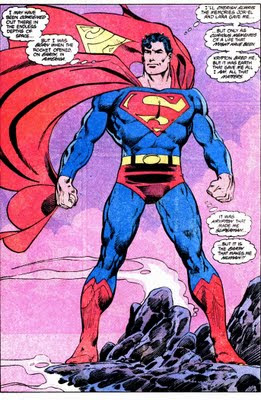 Byrne's motivation in depicting Superman in this way came from his own experience as an immigrant.  As Byrne put it in his typically blunt (and offensive) manner;


I was born in England, and I am proud of my English heritage (I was also quite a lot older than Kal-El when I left “home,” so my connections would be stronger) but I grew up in Canada and I have lived for the last 25 years in the US, and I don’t ever, ever, feel like a “displaced Englishman.”
Clark would be proud, too, of his Kryptonian heritage, but later portrayals of him have tried to shoehorn in too much of the pychobabble of adopted children longing for and seeking out their biological parents. Excuse my French, but to me, they fall under the heading of “ungrateful little shits.”
Clark grew up as human, thinks as a human, reacts as a human. He lives and loves as a human. And that is what really defines him.

I certainly do not agree with Byrne's assertion that adopted children who seek out their biological parents are "ungrateful little shits" but I can't argue that at the age of eleven the depiction of Superman as a lonely alien put me off the character a great deal.  Byrne's more 'human' version was a breath of fresh air to me and was one of the many factors that drew me into Man of Steel.

A more human Superman didn't just mean a Superman that didn't bang on about Krypton quite as much.  Byrne figured that, since Superman didn't wear a mask, no one would even consider that he had a secret identity.  Now that Clark Kent was free of the need to hide his true self behind a bumbling facade he became an outgoing, confident individual who proudly displayed his high school football trophies in his apartment.  Clark became the 'real' persona and Superman became the facade.

To emphasize the importance of Earth in Clark's development, Byrne also gave us a very different take on the Planet Krypton.  Byrne took the idea of Krypton as a scientific Utopia to the extreme and portrayed the planet as a cold, sterile place, where physical contact was banned, robots did all the dirty work and nobody had any eyebrows.  Jor-El was portrayed as the only man on Krypton who realised the importance of the humanity that his society had sacrificed for comfort and a longer life.  For the first time ever Earth started to look pretty damn good next to Krypton.


Man of Steel is packed with many other such changes to the Superman mythos.  For example, Lex Luthor is a corrupt businessman who sees himself as the most powerful man in Metropolis.  When Superman comes along Luthor is knocked off the top spot and he doesn't take it very well.  By the time Man of Steel came out Luthor had become a credible physical threat to Superman.  He was physically in peak condition and usually clad in huge, green battle armour.  Byrne decided that it wasn't necessary for Luthor to be able to engage Superman physically. Luthor could be Superman's arch-nemesis merely by being everything that Superman wasn't.  Petty, greedy, spiteful, ruthless, cunning and completely evil.  Byrne drew Luthor as a physically powerful man who had began to feel the effects of age.  This made Luthor's hatred of Superman all the more understandable.  Luthor was strong and powerful but he was gradually losing it all as he got older, his hair loss a physical manifestation of this process.  And now he was confronted by Superman, a man more powerful than he would ever be, a man who would never lose that power unless Luthor took it from him.  All this is apparent just in the way Byrne draws Luthor.  Sadly many of the artists who followed Byrne (even the great Jerry Ordway) never seemed to grasp this and often drew Luthor as a fat slob.


There are however, a few flaws to be found in Man of Steel. Byrne's problems with women have been well documented.  Many of his female characters are victims, or thinly veiled sexual fantasies or at the very least, completely disagreeable mega-bitches. There's an undeniable streak of misogyny that runs through much of his work and Man of Steel is unfortunately no exception. Lara disapproves of her husband's decision to send Kal-El to Earth and swoons at the sight of a shirtless Earthman like the wealthy dowager in The Simpsons who's always exclaiming "Well I never!"  Batman and Superman fight Magpie, a psychotic kleptomaniac with a weakness for shiny things.  Lana Lang is re-imagined as a lonely, empty person, who has nothing better to do than follow Superman around for ten years.

Despite this, Byrne's depiction of Lois Lane in Man of Steel is spot on. Byrne's Lois comes across as passionate, independent, and honest but also irrational, petty, and mean (particularly when dealing with Clark Kent), and it works. Lois Lane isn't meant to be some perfect example of womanhood. Lois is meant to be human.  She is a decent but flawed individual, as guilty of human failings as we all are.  This is one of the things that makes Superman's love for her so wonderful.  He loves Lois like he loves the human race, warts and all.

Byrne changed many other things about the Superman mythos.  He made Bizarro more of a mindless monster and he made Batman and Superman's relationship much less cosy and much more antagonistic.  These changes drew in my eleven year old self and began a life long love affair with the character.  But over the years I've come to realise two very important things about Man of Steel and Superman;

1) I now find many of the things I initially found boring about the character really, really cool!

For example these days I have a much better understanding of the interpretation of Superman as a lonely alien.  In Wales we use the word 'hiraeth', a word that is uniquely Welsh and has no direct English translation.  It roughly translates as a feeling of nostalgic homesickness tinged with loss and longing.  I now believe that the depiction of Superman as a man who feels deep 'hiraeth' for his lost world is not only a valid interpretation but also an extremely interesting and compelling one.  If the freshness of the more 'human' Superman in Man of Steel hadn't grabbed my attention, then maybe I wouldn't have come to understand and love the many other versions of the character.  Byrne broke down that initial barrier and drew me into the character long enough to appreciate Superman's many other incarnations.

I realise now that Byrne didn't really change anything, he just looked at aspects of the character that were already there from a different angle!  Superman's human side had always been an important factor.  One of the oldest, most classic and iconic Superman images is that of Clark standing by Pa Kent's deathbed as his father reminds him never to forget the lessons he had learnt from his upbringing.  Superman's human side was there all along, Byrne just brought it to the forefront.  And look at Lois! Lois Lane was giving Clark a hard time right from the start, back in the days of Jerry Siegel and Joe Shuster.  Byrne just brought Lois back to her roots, changing her back from the ditzy, marriage obsessed airhead that she had become in the intervening years.  Also, take a look at Krypton.  Krypton may be cold and sterile but it's still scientifically advanced, and Jor-El is still a visionary. 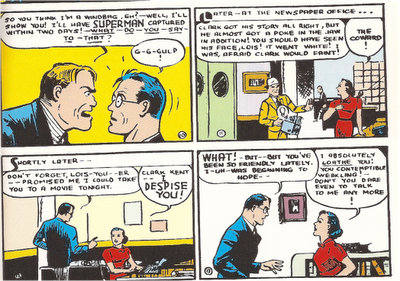 I realise today that this is what makes Man of Steel so special.  Byrne wrote and drew a story that managed to seem fresh and new to an eleven year old boy, but he did it without throwing the super-baby out with the bath water.  Byrne's Superman is still recognisably Superman, everything that makes him Superman is still there, just turned on its head or seen from a different angle.

So even though a more relatable and human character sucked me into the wonderful world of Superman comics, do I think that Superman has to always be like this to succeed?  Do I think that this the approach Grant Morrison should be taking next week?  The answer is NO!  Byrne didn't give us the ideal, definitive Superman, he just made us look at Superman differently.  He drew me in by emphasizing aspects of the character that had not been emphasized before, but had always been there.  Once I was in I was hooked, and the wider world of Superman and his many incarnations was mine to discover and rediscover.  This is what Morrison needs to do with Action Comics #1.  It's a feat worthy of Superman himself.  Can he do it?  I hope so.