Was the Moon Landing Faked? (Spoiler: No) 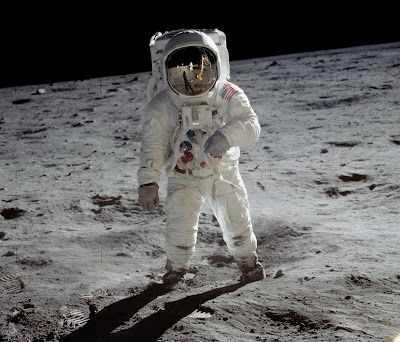 The Apollo programme was developed with the objective of landing humans on the Moon and returning them safely to Earth. Apollo 11 was the first mission to achieve this on the 20th July 1969. In total 12 people have walked on the Moon, the last being the Apollo 17 astronauts on the 14th December 1972. Thanks to the Apollo missions we have a wealth of information from the Moon, including photos, video footage, and rock samples.

But what if was all a load of rubbish?

Fifty years after the Apollo 11 mission, some people are still arguing that NASA’s Apollo programme was an elaborate façade and that the Moon Landings were fake. What follows is some of the more common arguments made by conspiracy theorists and some of the reasons why I think their arguments just don’t hold water.

One Giant Vegas Party for Mankind

One of the earliest Moon landing conspiracy theorists was Bill Kaysing, author of We Never Went to the Moon: America's Thirty Billion Dollar Swindle (1976). According to Kaysing, the engines of Saturn V (the rocket that got the Apollo missions to the Moon) were “totally unreliable” so smaller, weaker but more reliable rocket engines were stashed inside Saturn V’s engines. In 1969 the public were shown the astronauts entering the Apollo spacecraft but they actually snuck out with a high speed elevator. The rocket blasted off and Apollo was placed in a parking orbit. Meanwhile the astronauts were living it up in Las Vegas with a bunch of showgirls, pausing their debauchery only briefly so they could fake the moonwalk on a film set. They were then flown to Hawaii where they were dropped off in the Apollo Command Module in order to get picked up again for their heroic return. 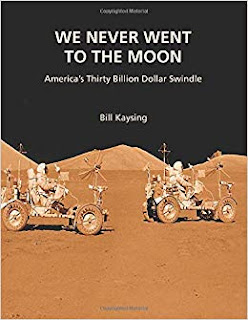 On what authority does Kaysing make these claims? Well, from 1956-1963 he was a senior technical writer, a service analyst, a service engineer, and a publications analyst for Rocketdyne, the company that built the F-1 engines used on the Saturn V rocket. Sounds quite impressive. But bear in mind that he had no knowledge of rockets or technical writing when he got the job, only a BA in English. Still, he did say that even before 1969 he had, in his words "a hunch, an intuition, ... a true conviction" that no one was going to the Moon.

For the love of God why?

Why would NASA want to fake the moon landings?  There are three main reasons generally provided by conspiracy theorists.

Let’s examine these motives one by one.

i)                    If it was a hoax Russia would have noticed and frankly wouldn’t have been able to shut up about it. Bart Sibrel has argued "the Soviets did not have the capability to track deep space craft until late in 1972, immediately after which, the last three Apollo missions were abruptly cancelled." Nothing about this statement is true. The Soviet Union had been sending unmanned spacecraft to the Moon since 1959 and had deep space tracking facilities since 1962. Also, the cancellation of the Apollo missions wasn’t abrupt. It had been announced in 1970, two years before the last mission. Bart Sibrel by the way, is the man who got punched by Buzz Aldrin while trying to get him to swear on the Bible that the Moon landings were real.
ii)                   If NASA had indeed wanted to avoid humiliation and scrutiny they did a pretty crappy job of it in 1967, when the crew of Apollo 1 were tragically killed in a flash fire on the command module launch pad, leading to NASA’s upper management team being questioned by the Senate and House of Representatives space oversight committees.
iii)                 As mentioned earlier, the Apollo missions didn’t suddenly end as soon as the Vietnam War ended. The cancellation of the missions was announced in 1970, and one of the main reasons for this was because NASA’s budget had been cut to pay for the Vietnam War!

The most compelling argument against the Moon landings being fake is what aerospace engineer Jay Windley describes as a question of scale. NASA doesn’t build spaceships all by itself, it hires private companies to do it for them. It stands to reason that all conspiracy theories asserting that no lunar landing took place must argue that faking the lunar landing was easier than actually accomplishing it, otherwise why bother faking it. But how easy would faking such a thing actually be when you take into account the number of independent contractors that would have been involved. Windley has identified three hypothetical scenarios that would had to have occurred: the Huge Conspiracy Scenario, the Absolute Minimum Scenario, and the Need-To-Know Scenario.

Huge Conspiracy
In this scenario NASA did not have the necessary technology to go to the Moon and so all the private companies who were contracted by NASA to contribute to this technology must have been paid to do nothing. Their big NASA contract would have been announced in order to keep their shareholders happy and then they would have sat on their arses for a few years. All the employees of these companies who would presumably be expecting to get cracking on this big new job they’d just been awarded, would be urged to keep quiet. That’s a lot of people keeping their mouth shut. At the height of the Apollo project almost half a million people were working on it. Yet in over thirty years, not one of these half million people has come forward with incontestable evidence to say they were part of the conspiracy. Were they all paid off? Even presuming half a million people could be bought off, why aren’t we seeing hundreds of thousands of suspiciously wealthy retired engineers all over America today, living in mansions and driving sports cars? It’s possible they could have been threatened with retribution from a NASA ninja-death squad, but there’s no evidence of this. And it’s amazing that there’s been no death bed confessions in the past fifty years. 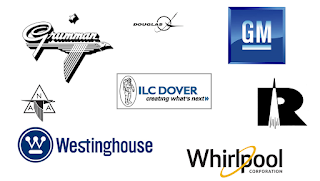 Absolute Minimum
Perhaps then only a few unscrupulous types at the top were in on the conspiracy and most people working on the Apollo missions thought they were working on the real thing? In that case we’d have to believe that all the engineers employed by these private companies believed they were really contributing to an actual lunar mission. As far as they’re concerned they’ve been paid to solve the problems inherent in sending people to the Moon. If so, why would they sign off on materials and devices that they knew didn’t work. If this was the case then NASA would have been provided with a bunch of stuff for their fake Moon mission that was actually capable of sending people to the Moon. So, why would they still want to fake it?

Need-to-Know
Couldn’t the truth be somewhere in between? Perhaps only the people who really needed to know were in on it. That would logically still have involved the managers of the private companies contracted and, given their technical knowhow, many of the engineers. We’re still talking about a heck of a lot of people.

The problem with the idea of a Moon landing conspiracy, argues Windley, is that “you have to buy off enough of the work force in order to produce convincing hardware without producing working hardware. In short, there is no middle of this road. Either you produce real hardware, or you have a very large conspiracy with no leaks after thirty years…. The moral: if you want to perpetrate a hoax, don't have it catered.” 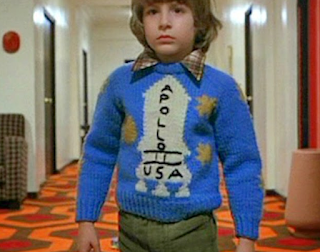 Mary Bennett and David S. Percy have argued that many of the people who worked on the “hoax” did in fact blow the whistle, but they did so by subtly hiding errors in the Moon landing that were so egregious that they would eventually unravel the whole thing.

A similar theory involving whistle blowing with hidden clues involves filmmaker Stanley Kubrick and his 1980 film, The Shining. According to this theory Stanley Kubrick filmed the Apollo 11 landing on a film set after being chosen for this task due to the success of 2001: A Space Odyssey. In fact, Bennett and Percy argue that Kubrick, along with Arthur C. Clarke, were involved in the conspiracy before 2001 was released in 1968, and that 2001 was made to manage the expectations of the public of what they were to see in 1969 when the “hoax” was carried out.

Apparently, the guilt proved too much for Kubrick, and in 1980 he released a film that contained his veiled confession, The Shining. 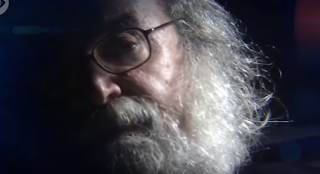 One might wonder why whistle blowers felt the need for such subtlety, given that they were up against evidence as compelling as actual photographs. And we’re not just talking about the photos taken by the Apollo astronauts. The Lunar Reconnaissance Orbiter is a NASA robotic spacecraft launched in 2009 and currently orbiting the Moon. It has provided us with photographs of the Apollo landing sites. For example, here’s the Apollo 11 landing site.

Plenty of parties not involved with NASA have been able to verify NASA’s claims. Earlier I mentioned that the Soviet Union had monitored the Apollo missions. Other countries have also encountered evidence of the success of Apollo.

In 2008 the Japan Aerospace Exploration Agency (JAXA) SELENE lunar probe provided us with a three-dimensional reconstructed photo that matched the terrain of an Apollo 15 photo taken from the surface. In 2009, India's lunar mission Chandrayaan-1 recorded evidence of disturbed soil around the Apollo 15 landing site and tracks of the lunar rovers.

Planetary scientists who are unaffiliated with NASA have studied the Moon rock brought back by Apollo and confirmed their age and origin. They have been used to identify lunar meteorites collected from Antartica. The rocks returned by Apollo have also been found to be very close in composition to samples returned by the independent Soviet Luna programme.

Apollo astronauts left a bunch of mirrors on the Moon called laser ranging retro-reflectors, or LRRRs. These mirrors have been used as targets for Earth based tracking lasers. Photons reflected back to Earth by the LRRRs have been detected. The NASA-independent Observatoire de la Côte d'Azur, McDonald, Apache Point, and Haleakalā observatories regularly use the Apollo LRRR.

So, were they fake?

When one considers what a monumental feat the Moon Landings really were its perhaps not surprising that people have their doubts. In an era of fake news perhaps cynicism is healthy? But sometimes people aren’t trying to catch you out. Sometimes things aren’t too good to be true. Sometimes real life is just cool. Occasions where real people get together and accomplish something genuinely amazing are rare. But that’s all the more reason to celebrate them.

So yes, the human race is full of liars and cheats and people who abuse their power. But let’s give credit where it’s due.

We made it to the Moon.