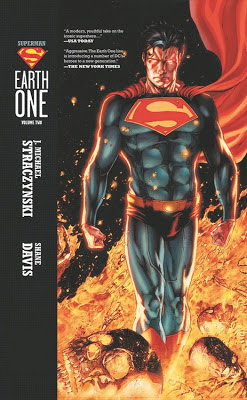 While I enjoyed J. Michael Straczynski and Shane Davis' Superman - Earth One, Vol. One, I couldn't help but feel that it was something of a wasted opportunity. The Earth One line is free from the constraints of the continuity and canon of the monthly Superman comics and therefore should be able to take risks and show us different and unique takes on familiar characters. I felt that Earth One, Vol. One was a good enough story but, aside from a few changes to the history of his home planet Krypton, it offered us no new insights into the character of Superman. Volume Two, I'm happy to say, is quite different. This book offers us a take on Superman that I genuinely feel couldn't have been offered in the main Superman title. As a result it has some uncomfortable moments, but these moments ultimately serve to make the book all the more rewarding.

Straczynski's Superman, as in Volume One of this series, is very aware of his alien nature and as a result is quite a lonely, isolated figure. But unlike Volume One the tragedy of his isolation is communicated effectively by some very human moments. Clark Kent thinks back on the death of a childhood pet, and grows ever closer to his attractive new neighbour, Lisa Lasalle. These little identifiable insights into Clark's life and personality are far more than we got in Volume One and they make Clark's self imposed distance from the rest of the human race all the more poignant. His powers enable him to give his pet a unique and wonderful final, resting place and yet prevent him from getting too intimate with his new love interest.

The question of whether Clark is able to get intimate with a human is not the only potentially awkward area covered in this book. Straczynski also seeks to address that old question, “Why doesn't Superman end all war?” Towards the end of the book we see Superman interfering in a big way in the affairs of a foreign nation. In the more mainstream comics Superman has traditionally drawn a clear line for himself between being a friend who's here to support and help the human race and being an alien invader who's here to impose his will. He's careful never to cross this line. But this isn't the mainstream Superman. This version of Superman feels that he can't afford to “work within the system” as he puts it. He sees himself as separate from the human race, and even superior to it, and as a result he feels he has a responsibility to blur that afore mentioned line somewhat. It's a take on the character that's bound to feel uncomfortable for a lot of Superman fans, it certainly did for me. But I also feel that it's an aspect of the character that's worth exploring. Could a person with Superman's powers really completely ignore a lot of the suffering that goes on in the world, even in the name of the bigger picture of non-interference in human destiny? The alternate Universe of Earth One provides a perfect opportunity to look into this darker, more uncomfortable aspect of our hero and I applaud Straczynski for doing so.

The main villain of the story, The Parasite has a somewhat clichéd back story. The whole "bad seed who's protective of a younger sibling" trope has been used more effectively elsewhere, notably with the character of Captain Cold during Geoff Johns' run on The Flash, and in the recent DC Animated movie, Superman Vs. The Elite. And I can't help but wonder if the Parasite would have been a more compelling villain if he had been less of an irredeemable psychopath before his transformation.

The Parasite does however look fantastic. The decision to cover the Parasite in transparent green pustules was a brilliant one. He looks truly disgusting, a proper monster. I was less impressed however with other aspects of Shane Davis' art. His women all look the same. Lois Lane, Lisa Lasalle, and Parasite's sister Theresa would be indistinguishable from each other were it not for their hair colour. I was also disappointed with the design of a protective armour worn by Superman. It's certainly in keeping with the established look of Kryptonian technology but it's pretty boring to look at.

While Shane Davis' art wasn't completely to my liking I still feel there's a lot to admire about Superman – Earth One, Volume Two. If you're a hardcore Superman fan with a very fixed view of what is acceptable behaviour for a Man of Steel then you probably won't like it. But if you're interested in seeing an exploration of Superman's role on Earth that goes down some uncomfortable but intriguing avenues then you'll probably enjoy this book as much as I did.