Why I think Barry Allen is Awesome

In 1985 DC Comics killed off Barry Allen, otherwise known as The Flash, Fastest Man Alive.  It wasn't long before his sidekick, Wally West took over his deceased uncle's heroic mantle.  Over the course of over two decades Mike Baron, William Messner-Loebs, Mark Waid, Geoff Johns and many other talented writers took Wally on a journey that gradually transformed him from an arrogant, slightly selfish young womanizer to a hero, a family man and a worthy successor to the Flash legacy.  Now all of a sudden Barry is back from the dead and is once again the main Flash of the DC Universe.   Meanwhile Wally has been benched and DC have confirmed there are "no plans for Wally West in the new Flash series.”  As a result a lot of fans are pissed off.  This is a perfectly understandable reaction.  For a whole generation of Flash-fans Wally was their Flash.  Some of these fans weren't even alive when Barry was the Flash and now he's back and the hero that they've followed for so long has been sidelined.  I was born four years before Barry's death and so I'm part of 'Generation Wally'.  Despite this I'm more than happy to see Barry's return and while I miss Wally I'm not that bothered about seeing him take a back seat for a while.

I've written before on this blog about why I feel the time is right for Barry to take over from Wally as DC's main Flash.  Check it out, comment on it, Tweet it, share it with your friends!  During the course of that post I discuss at great length the reasons behind my love of Wally as a character but I never really explain my love for Barry.  Many fans have accused Barry of being a boring, dated character, undeserving of the prominence that DC has now thrust upon him.    Personally I believe that he's just as good as Wally, and just as worthy of being the the most prominent Flash in the DC Universe.  My love of Barry Allen can be traced back to just one comic, the first Flash comic I ever read.  Flash Vol. 1 #206 (1971) a comic that contains a story called '24 Hours of Immortality'! 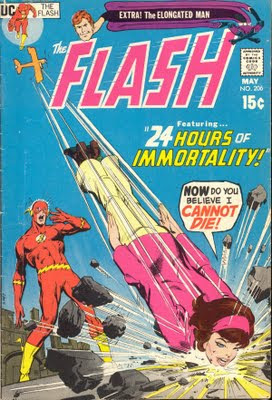 In '24 Hours of Immortality' two ordinary people are rescued from death by two super advanced aliens who offer them an extra 24 hours of life in order to tie up their loose ends.  For that 24 hours they are completely indestructible!  High Five Comic has summed up the story pretty accurately and hilariously.  That particular blogger describes the story as "completely fucking absurd" and it's difficult to argue with that assessment.  '24 Hours of Immortality' is goofy, even for a classic Flash story, but it's also immensely enjoyable and it has two things going for it that transformed the young me into a lifelong Flash fan.

Firstly, I love the cover. This issue has one of the most striking covers I've ever seen, but then what do you expect? It's a Neal Adams cover!  It would have been so easy for Adams to draw the indestructible lady landing gracefully on her feet but instead he has her smashing into the ground CHIN FIRST! This cover is so striking that I remember actually being scared of it as a child, but it definitely made me want to read the story inside.

The second brilliant thing about this comic is the story's ending.  The two people who were granted the aforementioned 24 hours of immortality are resigned to their fate and ready to offer themselves up to the aliens once their day has ended.  Flash on the other hand isn't giving up without a fight.  He tells the aliens that they'll have to kill him first, and they do indeed try to do just that.  Flash uses his speed to counter everything they throw at him and eventually they acknowledge that the human race isn't quite as crappy as they first thought and promptly bugger off.  Reading the story today it's apparent that Flash uses his usual tricks (vibrating his molecules etc) to outwit some pretty unnecessarily convoluted death traps.  But when I first read the story as a child I saw a hero who hadn't just whizzed up and tried to punch the baddie in the face.  The Flash hadn't just beaten the villains, he had impressed them with his courage and his brains!  Obviously I wouldn't have expressed this at the time, I just thought Flash was cool, I didn't consider why I thought this.  But it was definitely Barry's cleverness that left an impression on little Paul, combined of course with the amazing Adams cover.  As I grew up I sought out more and more of Barry's adventures and I realized that that the two things that initially drew me to Barry, cleverness and cool covers, are what The Flash is all about!


This then, is why I love Barry Allen just as much as I love Wally West, and why I'm happy to see him back as The Flash.  I grant you, it's not the best reason in the world.  '24 Hours of Immortality' isn't the best Flash story in the world, it's not even the best Barry story in the world.  But it was my first. And I read it so much that the cover fell off.  And it introduced me to a character who remains, not only the Fastest Man Alive, but one of the greatest super-heroes of all time.