Three Comics That Shaped My Life

I've always disliked it when critics and bloggers describe a piece of pop culture as important. Once in a while a piece of work may come along that changes the way we think about a particular medium, but to dub that piece important just seems like pretentious hyperbole to me. For example, Revolver's a great album, but it hasn't cured any major diseases yet. And yet the following three comics are important, at least they are to me. I can honestly say that more than any other piece of pop culture, these three comics have helped to shape me into the person I am today.
The Beano #2354 (1987) 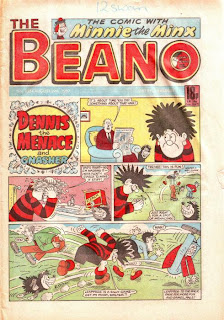 The 29th of August 1987 is a very important day for me. It's the day my old Nan bought her grizzling six year old grandchild the latest copy of The Beano in an effort to get him to shut up for five minutes. It was a gesture that was to begin a lifetime of comic collecting! The Beano introduced me to the joy of regularly following a comic and looking forward to 'comic day'. It also introduced me to the wonderful concept of a group of characters sharing their own universe. But more than anything else The Beano was very, very funny and helped to shape my sense of humour.

One of my favourite strips was Tom Paterson's Calamity James. James is the world's unluckiest boy. He is constantly followed around by his own personal rain cloud and each week finds himself the victim of some disaster or other. His only friend is his pet, Alexander Lemming, who is always looking for things to plummet from. The great thing about Calamity James wasn't just the bleak humour surrounding James' adventures but also the weird little things going on in the background of each panel that would usually go by unnoticed by the main characters. For example one panel might depict James stepping obliviously over bags of cash or gold bars while another panel might have a fly buzzing out of James' trousers carrying away his underpants. One of the best recurring background gags were the Little Squelchy Things. These were little blobs with faces that appeared in a variety of different guises, from Scottish Squelchy Things in tartan berets to cheeky Squelchy Things showing their bums.

Calamity James wasn't the only Beano strip to display this unique humour however. There were jokes and situations that were just as surreal to be found in strips such as Dennis the Menace, Minnie the Minx, Roger the Dodger and Baby-Face Finlayson (a baby dressed as a cowboy who would commit crimes in a motorised pram). I believe the following panel from The Bash St. Kids sums up everything I loved about The Beano more than anything else. 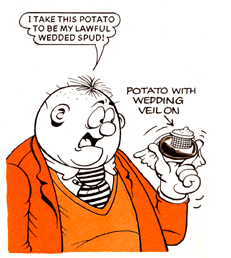 Many thanks to Zeg The Dalek and the members of The Beano Project for their help in tracking down my very first Beano. 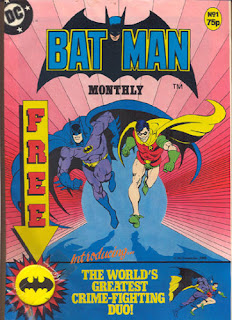 The following year my dear old Nan was once again forced to dip into her purse in order to silence her moany grandchild. This time her purchase opened my eyes to the wonderful world of superheroes! The first issue of Batman Monthly contained a reprint of the first two issues of The Untold Legend of The Batman a story that covered every detail of Batman's world. The origins of Batman, Robin, Alfred and a whole bunch of villains and supporting characters are found in this story and I absolutely loved it. It introduced me not only to superhero comics but also to the wonderful experience of laboriously poring over the backstories of fictional characters in a slightly obsessive manner.

It was quite a while however before I fully embraced the world of superheroes. My dad had a pile of old DC and Marvel comics that I'd always been too scared to read. I must confess that I was rather a sensitive/wimpy child. I once burst into uncontrollable tears of fear at a screening of The Shaggy D.A. on a wet afternoon in primary school. As a result of my sensitivity/wimpiness, I was always too scared to read my dad's comics for fear of seeing something that might upset me. I even taped the last few pages of Batman Monthly #1 together so I could read the issue without fear of seeing the images of Joker and Two-Face that lay at the end of the comic. The day soon came however when the love of the story overcame my fear and I cut the tape binding the these pages. Once I had confronted my fears I realised there was nothing to be scared of and it wasn't long before I was digging into my father's comics. A lifetime of superhero fun followed.


Batman Monthly #1 taught me that confronting my fears can lead to a world of wonderful experiences. Unfortunately only this week I read Garth Ennis' Crossed and learned that I was right to be scared. Comics are terrifying and traumatic and can leave you with scars that will never heal. Oh well. 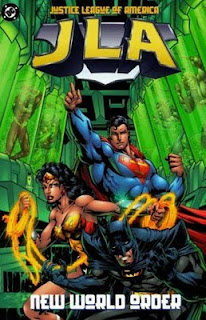 It was ten years after my first Beano, and I'd drifted away from comics and superheroes somewhat. It was for a variety of a reasons. Firstly, there was a lot of crap out there. I'd never really been a fan of the whole Image Comics style over substance approach that was so influential back then. Even as a kid I wanted more from my comics than guns and pouches and boobs. The last trade paperback I'd bought had been DC's Zero Hour in 1994 and, as I've previously discussed on this blog, it had left me scratching my head in bewilderment. But it wasn't just comics that had turned bad. I had too. Like many young men in their teens I had transformed over night into a complete arsehole. Being generally unpleasant to people took up most of my day, leaving me little time to enjoy comics.

That was the case until the day I found myself with a bit of spare cash and bought a CD, Kula Shaker: K and Grant Morrison and Howard Porter's JLA: New World Order. Crispian Mills' opus has long since been donated to some charity shop where I imagine it probably still remains. New World Order on the other hand is still one of my favourite comics to this day.

In the mid-eighties DC began to populate the Justice League with second stringers such as Blue Beetle and Captain Atom rather than the big guys like Superman and Batman. Initially the exploits of the new line up were very entertaining but by the mid '90s the original writers, Keith Giffen and J.M. DeMatteis had left and characters like Nuklon, Bloodwynd and Triumph were roaming the halls of Justice League HQ. There was nothing really wrong with these characters and there were still some great stories to be told (Dan Jurgens run on Justice League America stands out as particularly good). However, none of it really felt like proper Justice League. I had grown up on my dad's copies of Satellite era JLA and by the time Zero Hour came out I was yearning for some big names to join the League.

That was exactly what Morrison gave us with New World Order, the return of the seven founding members, Superman, Batman, Green Lantern, Flash, Aquaman, Wonder Woman and Martian Manhunter. Not only that but Morrison gave us the return of the 'punch-the-air-with-joy' moments that had long since disappeared from mainstream superhero comics. It seemed that everyone was so busy trying to copy the success of Dark Knight Returns, Watchmen, and Claremont and Lee's X-Men #1 back then that they'd forgotten that comics were occasionally supposed to be fun. New World Order seemed different. As I read Batman taking on a bunch of Martians, Flash defeating an evil speedster with a Flash-Fact and Superman inspiring the entire world to fight off a Martian invasion I was literally punching the air with excitement. I remember telling a friend at the time "I didn't know they made comics like this any more!" 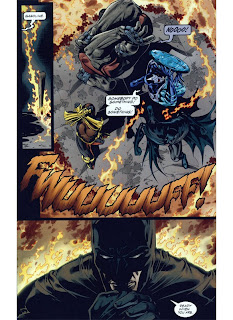 After New World Order I was back into comics in a big way and have remained so ever since. This may sound a bit wanky but reading that comic was also the moment I began to remember who I was before the horrors of puberty and comprehensive school. I began to get further away from Paul the Teenage Bastard and closer to becoming the sort of person I wanted to be. I'm not saying I'd still be a git if I hadn't bought that comic, and I'm not saying that I'm a perfect, well adjusted person now. But reading New World Order was definitely the beginning of a period in which I did a lot of growing up. With this new found maturity came the realisation that being deliberately unpleasant to people is bad, comics are awesome and Kula Shaker are shit. 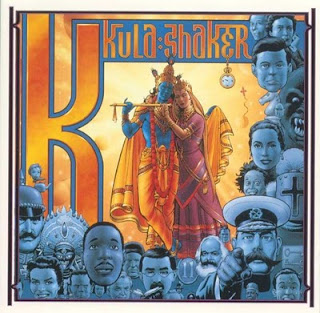 So what about you? What are the comics that have shaped your life? Leave a comment and let me know.